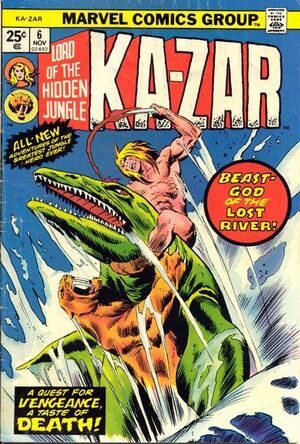 Appearing in "Waters of Darkness, River of Doom!"Edit

Synopsis for "Waters of Darkness, River of Doom!"Edit

Ka-Zar rescues a young boy named Kem Horkus from pteordactyls and take him back to the hunting party led by his brother. Bar Horkus has spent 20 years pursuing a Tylosaurus they call The Behemoth that took his eye and arm in their first encounter. Bar's mad obsession has been gradually wearing on his men, but Ka-Zar agrees to help his quest for Kem's sake. The next day, the hunters set out on the river in two rafts, each equipped with a large ballista. When they find The Behemoth, Bar Horkus' bolt only wounds his prey, and Ghakar's raft turns away before the other ballista can fire. Refusing to retreat, Bar Horkus leads the rest of his men to their deaths against the angered Behemoth. Ka-Zar only manages to save Kem before finally killing The Behemoth himself, exacting the revenge Bar sought not as a personal vendetta, but as his duty to the law of the jungle. Afterwards, Ka-Zar's only consolation to Kem is the promise to find Ghakar for betraying his brother.

Retrieved from "https://heykidscomics.fandom.com/wiki/Ka-Zar_Vol_2_6?oldid=1439156"
Community content is available under CC-BY-SA unless otherwise noted.