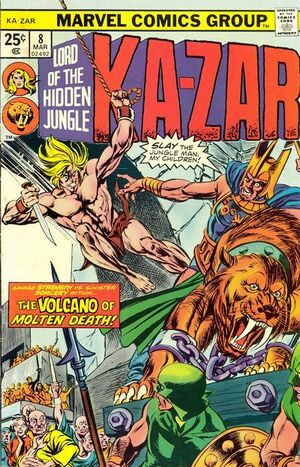 Appearing in "Down into... the Volcano!"Edit

Synopsis for "Down into... the Volcano!"Edit

Appears to be a thinly-disguised version of the Biblical story of Lot and Sodom and Gomorrah. "Gondora" is a semi-portmanteau of "Sodom" and "Gomorrah." Other apparent parallels: "Tul" is the one kindly citizen of the city who offers Ka-Zar shelter, lust-stricken residents of the city try to force their way into the tavern after Tul's daughters and are struck down by Ka-Zar, the city is destroyed in a fiery conflagration, and Tul's wife is turned into a statue of ash by the heat when she is the only one to look behind as they flee.

Retrieved from "https://heykidscomics.fandom.com/wiki/Ka-Zar_Vol_2_8?oldid=1439160"
Community content is available under CC-BY-SA unless otherwise noted.