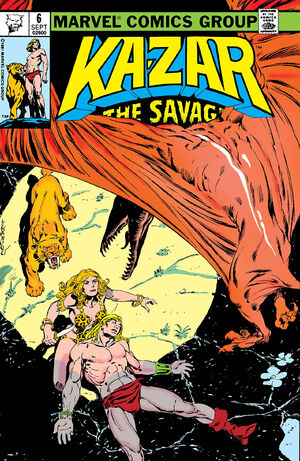 Shanna is having delusions due to the effects of the mind-switching device. Ka-Zar has been stung and poisoned by a giant scorpion, and Shanna starts seeing a ghostly figure. The apparition reveals that he is an ancient Atlantean, and that Pangea is actually an outpost of Atlantis. The ghostly figure reveals himself to be a scientist named Dherk, he predicted the city's eventual sinking, and due to this he is banished to Pangea. Dherk body was placed in suspended animation but is able to appear as a projection, but he can temporarily make himself tangible. Dherk first saw Shanna while she was in the mind transfer device and from their he has fallen in love with her.

Shanna does have mutual feeling for the man which is possibly also a result of the machine influence. Shanna rejects his advances and stubbornly tries to drag Ka-Zar to the Aerians in the hope of a cure. Due to the distant and terrain she passes out from exhaustion, Dherk manifests physically and saves her, after her pleas for help he reluctantly rescues Ka-Zar. Due to remaining physical to long Dherk eventually dies.

Retrieved from "https://heykidscomics.fandom.com/wiki/Ka-Zar_Vol_3_6?oldid=1726503"
Community content is available under CC-BY-SA unless otherwise noted.