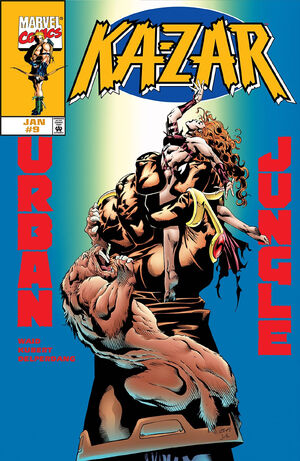 Appearing in "Toward Shadowed Places"Edit

Synopsis for "Toward Shadowed Places"Edit

Ka-Zar and Shanna help Dherk the ancient Atlantean, in his new robot body, rebuild his outpost when a steam vent explodes, revealing a new corridor. They find a room full of clear containers with tiny mystical creatures such as: a tiny unicorn, a tiny griffin, a tiny minotaur.

Sometime later after Ka-Zar and Shanna have left the outpost, they're where woken up to Dherk in a frenzy, shouting "where is it?".

It turns out that the little creatures were real, and just shrunk down to a minuscule size by the ancient Atlanteans. It was revealed that Shanna stole the tiny griffin and it's now escaped and growing in size. They start to track it and find that it keeps getting bigger, they follow it track to the Aerians. Buth's girlfriend Dephine is badly injured. Eventually due to a group effort they are able to force the griffin into a near by volcano. After the explosion a man-made cavern is revealed in the side of the volcano.

The cavern had writing on it which said "Abandon hope all ye who enter here", which is similar to, but not quite the same as the message in the poem Dante's Inferno, but it was in English?.

Retrieved from "https://heykidscomics.fandom.com/wiki/Ka-Zar_Vol_3_9?oldid=1439201"
Community content is available under CC-BY-SA unless otherwise noted.