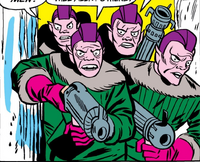 The Kallusians were a race of aliens who were forced from their home planet by an interplanetary war.[1] Decimated[2] and pursued by their foes, the Yirbek, they fled to Earth to repair their weapons and regroup their forces, but the amoutn of oxygen was too low for them and they started suffocating. They constructed a base under the North Pole. The Earth scientist Doctor Svenson, performing in-site research, was discovered by them. Moved by their plight, Svenson offered to help them, constructing equipment to help them survive in the Earth's atmosphere, which was otherwise lethal to the Kallusians.[1]

When the Wasp was shot during the Avengers' battle against Count Nefaria[4], her lung was punctured and the only doctor skilled enough to save her was Doctor Svenson. The Avengers sought out Svenson, and discovered he had been replaced by a Kallusian impostor. Discovering their polar base, the Avengers clashed with the Kallusians, trying to free Svenson. At the same time, a fleet of star ships in pursuit of the Kallusians entered orbit around Earth. The Kallusians agreed to leave Earth and confront the enemy fleet light-years from there, while the Avengers remained on Earth with Svenson. Only The Earth's Watcher kept track of that battle,[1] and to most Earthlings, the result of it is unknown.[2]

They need special oxygen mask to provide them with extra oxygen when in Earth.[1][2]

Ogor is the monarch ruler of the Kallusians, who guided them towards Earth, fleeing from an interplanetary war. When the Avengers broke into their underground city, he ordered to render them immobile, but with the hearing unimpaired, as he told them the history of his race. At first, he refused them to bring Doctor Svenson back to the surface, but, as soon as the Kallusians were discovered and had to leave the planet to engage their foes into outer space, he agreed to transport the Avengers and Doctor Svenson back to America through a matter displacer[5].

Retrieved from "https://heykidscomics.fandom.com/wiki/Kallusians?oldid=1563454"
Community content is available under CC-BY-SA unless otherwise noted.