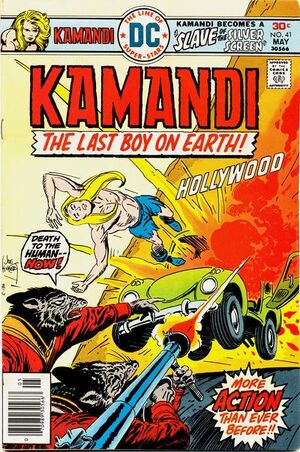 Appearing in "The Hollywood Hounds"Edit

Synopsis for "The Hollywood Hounds"Edit

Kamandi, Arna and Doctor Canus arrive in Hollywood, California. They are shocked to discover that the city has remained perfectly preserved ever since the Great Disaster. Suddenly a group of Rats open fire upon them from a mountaintop with their bazookas. The three jump into a Volkswagen Beetle and escape.

They continue driving along the Hollywood freeway until their car runs out of gas. They ditch the car and begin walking down one of the empty boulevards. They find a group of well-dressed Coyotes walking out of a movie theater. The Coyotes see Kamandi and decide to attack him. After a brief scuffle, they succeed in apprehending him, and bring him to famed movie producer, Louis B. Mogul. Mogul wants to use Kamandi in his next film.

Suddenly, a group of masked raiders storms Mogul's office at Paramour studios and abduct Kamandi. They take him aboard their helicopter and Kamandi decides to fight back. He wrestles with one of the raiders and succeeds in unmasking him. To his surprise, his abducter is actually, Sultin – leader of the Lion-Men.

Retrieved from "https://heykidscomics.fandom.com/wiki/Kamandi_Vol_1_41?oldid=1438892"
Community content is available under CC-BY-SA unless otherwise noted.