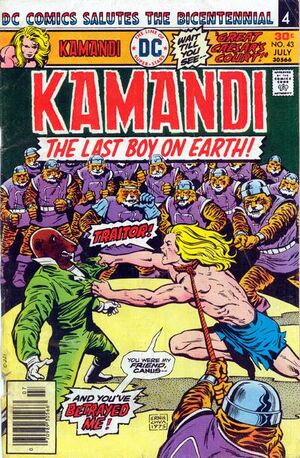 Kamandi, Arna and Doctor Canus arrive in Tennessee aboard a hot-air balloon in search of their missing friend, Ben Boxer. They land in the heart of the Tiger Empire and are immediately set upon by Tiger guards. Doctor Canus betrays Kamandi and reveals their position to the guards. Kamandi and Arna fight their way free, but he is shocked to think that Canus would actually betray him.

Meanwhile, Tuftan brings Ben Boxer before his father, the Great Caesar. Caesar pronounces sentence against him and orders him to be put to death. Ben flamboyantly alters his physique, covering himself with steel plating and escapes from the Emperor's throne room.

He bounds across the courtyard and fights past another troupe of tiger guards. The guards give chase, but Ben loses himself in the alleyways of Nashville. He eventually comes upon Kamandi and Arna. Kamandi tells Ben of Doctor Canus' betrayal and the group set up a camp in the northern woods. As night begins to fall, several Leopard-Men appear from the bushes and attack Kamandi.

Appearing in "Tales of the Great Disaster: Homecoming"Edit

Synopsis for "Tales of the Great Disaster: Homecoming"Edit

An ape man named Urgall wanders through the ruins of Times Square in New York City. He eventually comes upon one of his kinsmen, a cousin named Kalgar. Kalgar welcomes him with open arms and brings him back to the tribe. The grandmaster of the tribe asks Urgall of the wonders he had seen on his journeys. Urgall tells them of his adventures in the ruins of Washington DC.

While scouring the ruins of the old national capital, Urgall found a camp of Gorilla-Men (known as the Representatives) mercilessly impeaching (torturing) a group of enslaved humans. Though Urgall possessed no love for human beings, he could not stand by and watch a "dumb animal" beaten. He fought against the slavers, and as a result, found himself a slave as well. Inspired by the words carved on the stones of the old Lincoln Memorial, Urgall led a revolt against the gorilla slave masters.

Upon hearing the tale, the grandmaster is repulsed to hear that Urgall would value humans over his own people. He ostracizes him from the tribe and orders him to leave.

Retrieved from "https://heykidscomics.fandom.com/wiki/Kamandi_Vol_1_43?oldid=1438894"
Community content is available under CC-BY-SA unless otherwise noted.