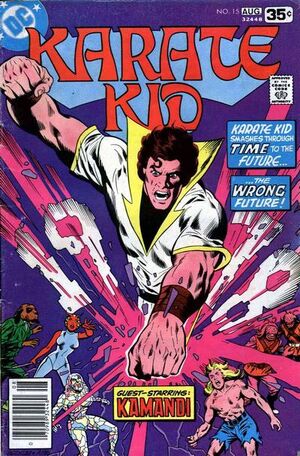 Keep your claws to yourselves, uglies!

Appearing in "Bring Back My Future to Me!"Edit

Synopsis for "Bring Back My Future to Me!"Edit

Karate Kid takes Diamondeth in the Legion Time Sphere into the 30th century. Unfortunately, due to the manipulations of Major Disaster and the Lord of Time, they arrive in the future of an alternate reality. Karate Kid is shocked when he exits the time sphere and finds two articulating dog-men named Doctor Canus and Mylock Bloodstalker. Karate Kid reacts defensively and attacks them until their ally Pyra arrives and knocks him down with an energy blast. Karate Kid makes peace with the others and Mylock tells him that he reminds him of their missing ally Kamandi. He reveals that Kamandi has been abducted by the Lobster People who revere him as some sort of god figure. The Karate Kid comes into conflict with the Lobster people and finds that they are invulnerable to his karate chops. They succeed in subduing him and take him prisoner. They force the Karate Kid to participate in a reenactment of an old martial arts film. His opponent is Kamandi.

Retrieved from "https://heykidscomics.fandom.com/wiki/Karate_Kid_Vol_1_15?oldid=1552080"
Community content is available under CC-BY-SA unless otherwise noted.