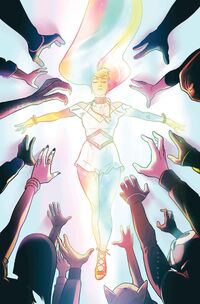 No, it's how I hide my powers. But where I'm going, I'll never have to do that again. I can finally stop pretending to be something I'm not.

Karolina Dean was raised by her parents Frank and Leslie Dean,[10] two actors from TV's General Hospital,[11] in Hollywood, California. Unbeknownst to Karolina, Frank and Leslie were aliens exiled from their home planet of Majesdane for criminal activities.[2] Karolina's true nature was suppressed by a specialized medical alert bracelet which is made of a special metal that dampens her energy points.[6][3] Additionally, the Deans were members of The Pride, a secret cabal involved in criminal and occult activities.[10] Despite growing up with two famous parents, Karolina was untouched by Hollywood scandal and developed a compassionate nature and strong moral compass.[10][1]

When Karolina and the other children of the Pride witnessed their parents' murdering a girl as part of a ritual sacrifice, they ran away from home, determined to defy their evil legacy. Karolina discovered her Alien heritage, which gave her the ability to fly and manipulate solar energy, powers that were inhibited for most of her life by a Medical alert jewelry bracelet forged from an alien metal. The Deans, wishing to give their daughter a normal life, told her she has a deadly allergy and instructed her to never take the bracelet off. After learning the truth, Karolina was ashamed of her alien heritage and didn't put much value in her life. She offered to sacrifice herself to save her friends when they were attacked by a vampire. The vampire was killed when he drank her blood, due to the solar energy stored in her blood.

After their parents' destruction, Karolina's friends were split up by California Social Services. Karolina Dean was sent to a foster family that was addicted to prescription painkillers, and she was forced to see a psychologist. Missing her friends, Karolina organized a reunion, asking the team to meet her at the James Dean memorial where they had decided to run away the first time. The teenagers escaped their new homes to regroup and fight the supervillains that have filled the void in Los Angeles left by their parents' departure.

Karolina was plagued by insecurities about her status as an extraterrestrial, and keeping the fact that she's a lesbian secret, although she has become more well-adjusted and open about her alien heritage.Empty citation (help)

Karolina misread some signs and unsuccessfully tried to kiss her friend Nico. Her love life became more complicated with the arrival of Super-Skrull-in-training Prince Xavin, her fiancée through an arranged marriage.[12] After fighting Karolina's friends, Xavin told her that they wouldn't force her to marry them, but they had hoped that their marriage might end the war between the Skrulls and the Majesdanians. Karolina revealed that she is not attracted to men and doesn't want to live a lie, so Xavin altered their form to that of a human woman and persuaded her to leave with them. Karolina returned to her parents' home planet with Xavin, hoping to stop the war, which was triggered by her parents. She gave her medical alert bracelet to Nico as a gift and remained in contact with her friends via voice transmissions.[2]

Though Karolina and Xavin grew close, Karolina continued to miss her friends. Karolina and Xavin prepared for their wedding,[13] but unfortunately during the ceremony a Skrullos guest insulted a Majesdanian bridesmaid's dresses leading to more fighting.[3]

After the conflict escalated, Karolina and Xavin returned to Earth.[3] Once the wedding and talks of peace failed, a Skrull Battleship launched to thermonutron missiles at Majesdane destroying it.[14] To avenge Majesdane, the remaining members of the Light Brigade, Majesdane elite military force, traveled to Earth to force Karolina Dean to stand trial in place of her parents. To save Karolina, and hopefully finally end the Skrullos-Majesdanian conflict, Xavin disguised themselves as Karolina and left Earth with the Light Brigade.[15]

Karolina was among the numerous extraterrestrials abducted Henry Gyrich's mandate to S.W.O.R.D..[16] She was brief held in custody of S.W.O.R.D. abroad the Peak.[17]

When Chase started to sense that Old Lace was still alive, the Runaways followed the trail straight to the Avengers Academy campus. When Justin Seyfert detected the Ultron tech within Victor, the Runaways were attacked. The fighting ceased and they made an effort to recover Old Lace. Much to the Runaways' joy, they found Old Lace alive and well. They then came into conflict with the Academy again as their plans to force Klara and Molly to stay were revealed.[18] They soon stopped fighting again, and Nico used a spell to share their memories. This lead to a mutual understanding and their differences were peacefully resolved. Karolina made plans to go on a date with Julie Power.[19]

Karolina and Julie continued to date, and things have progressed well between them.[20][21][22] When Nico and Chase disappeared with little notice,[23] Karolina took over the leadership role of the Runaways and was unalarmed by their departure, unlike Molly.[21] Eventually, the team disbanded. Karolina enrolled in Pomona College to live an ordinary and happy civilian life. She also started seeing a therapist to cope with her traumatic life experiences.

When Gert Yorkes returned to life, she rallied Nico and Chase to reform the Runaways. When they visited Karolina, she initially declined the offer.[24] Karolina eventually gave the offer a second thought and returned to the team in time to help them save Molly from her mad scientist grandmother.[25] Karolina moved to The Hostel's main building with the rest of the Runaways, but continued attending college.[8] During this time, Julie broke up with Karolina since she felt she was inattentive.[26] Not long afterwards, Nico decided to act on her feelings for Karolina, and they started dating.[27]