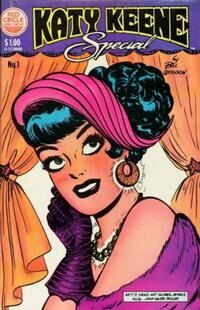 Katy Keene, a character created by Bill Woggon, has appeared in several comic book series published by Archie Comics since 1945. She is a model/actress/singer known as America's Queen of Pin-Ups and Fashions.

Her comics were interactive in that readers were encouraged to submit original drawings of outfits and accessories for her and her friends to wear, as well as designs for automobiles, homes, interiors, rocket ships, trailers and boats. These designs were used in the comics with credit given to published submissions. Many issues featured paper dolls of Katy in various costumes.[1] The character was ranked 57th in Comics Buyer's Guide's "100 Sexiest Women in Comics" list.[2]

Katy Keene was introduced in Wilbur Comics #5 in the summer of 1945, and appeared in subsequent issues of Wilbur and various anthology comic series in the 1940s including Archie, Jughead, Betty and Veronica and Ginger, eventually receiving her own title in 1949 which ran for 12 years. Specials such as Katy Keene Pin Up Parade and Katy Keene Fashion Book Magazine, Annuals and specials including Katy Keene Spectacular (1956), "Glamour" (1957) and Charm (1958), continued through the 1950s, but the character was not seen for about 20 years after the early 1960s.

In the book From Girls to Grrrlz: A History of Women's Comics from Teens to Zines by Trina Robbins Katy Keene is called a Bettie Page look-alike. "... but the resemblance ended there. Katy Keene was no bimbo and she had a good job (she was a movie star.)" [3]

In 1979, with Archie's permission, Katy fan Craig Leavitt published the Katy Keene Fan Magazine, which ran 18 issues until 1983. Having been a lifelong fan of the character, John S. Lucas's art was instrumental in the revival, as his work was featured in the magazine along with other artists' and fans' work. Several "Katy-Kons" (conventions) were held in Santa Barbara, California, and then later in conjunction with the San Diego Comic-Con celebrating Woggon and Katy.

Archie Comics decided to revive the character themselves in 1983, giving the character her own title by using reprint art of Woggon's as well as new art by Don Sherwood, Vince Colletta, Hy Eisman and Dan DeCarlo.

After seeing Lucas's art in the Katy Keene Fan Magazine and receiving letters from fans encouraging them to do so, Archie contacted Lucas, asking him to do the art for the revived Katy Keene Fan Club, which included pens, lapel buttons, membership cards, notepads, T-shirts, and sweatshirts. Not long afterward, Archie brought Lucas on as regular Katy artist. During the 1980s, '90s and 2000s, Lucas carried on the Katy tradition with his comics, his annual Katy Keene Christmas Cards and Paper Dolls and paper doll books from Hobby House Press.

In the early 1990s, Katy once again went into retirement, except for a 1994 appearance in The Punisher Meets Archie.

Archie re-reintroduced Katy, now a high school student and aspiring model, in its 2005 Free Comic Book Day issue. She then appeared in Archie & Friends Comics #101–#110. These ten stories were then compiled in a trade paperback, Katy Keene Model Behavior, in 2008.

Katy has a redheaded, bespectacled younger sister. In the original Woggon 1950s series, Katy's sister was a mischievous child around seven years old and known only as "Sis, the Candy Kid". In the 1980s, she was drawn as a tween or a young teen and received the name Melissa, but was still almost always called "Sis". In the short-lived 2000s series, her given name was Mackenzie. No explanation for the name change was given, although it may be due to the 1980s name's obscurity. Regardless, her real name is almost never mentioned and to both readers and characters, she is always called "Sis".

Originally, the 1950s Katy was 21 years old and Sis was about seven years old. In subsequent series, Katy is roughly the same age, but Sis was reimagined as being around 15 and has been so ever since. By this point, Katy had already been discovered in college. After going to work as an aspiring Broadway star, she became very successful in her modeling and acting career, so she became her sister's legal guardian.

Katy has had many recurring boyfriends over the years, the most famous of which are the redheaded and muscular boxer K.O. Kelly and his rich blond rival Randy Van Ronson. They were not often seen regularly in the 1980s when Katy dated the Latino airline pilot and talented dancer Ramon Ramirez and the Arnold Schwarzenegger parody Arnold Horsenlegger. However, K.O. and Randy became her main love interests again in the 2000s.

Katy's rival in her career and love life is the wealthy and snobby blonde Gloria Grandbilt and her best friend is the superstitious redhead Lucki Lorelei. Both Gloria and Lucki are also successful models, with the level-headed brunette Katy rounding out the trio.