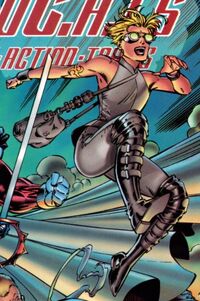 Zealot, wanting to be a warrior, could not be a mother. She chose not to kill her child, but to ensure her daughter's happiness, Zannah's mother Lady Harmony offered to pass the child off as her own instead. She named the child Kenesha, which means "The Survivor". This has led Kenesha to believe she is actually Zannah's sister, rather than daughter.[1]

Like the other Kherubim on Earth, Kenesha and her mother Zannah were stranded thousands of years ago when their Explorer ship crash landed after a battle with a Daemonite warship. Kenesha and the other survivors were scattered, forced to hide themselves amongst the human population. Their enemies had likewise been forced down, and though less humanoid, the Daemonites used their powers of possession and shapeshifting to blend in too. For the next few millennia, a secret war raged, with the Kherubim defending the vulnerable and oblivious humans from their would-be conquerors.

Kenesha's mother, Zannah, embraced the Coda, a warrior lifestyle, and took the name Zealot. Kenesha chose another path, becoming interested in archeology. At one point subsequent to this, Kenesha was poisoned, and in order to save her life, Zealot made a deal with a Witch named Tapestry. The witch healed Kenesha, but took a century of servitude from Zealot in return. Realizing Tapestry was trying to reshape her personality to make them more alike, Zealot made her sister promise to kill her should the witch succeed. Over the years she eventually began a love of history and became a pioneer in the field of archeology. During this period, she discovered the legendary 7 League Boots which allow Savant to run incredibly fast and teleport herself to various locations. She also came into possession of a mystic bag that seemingly has no bottom. She uses the bag to store many of her treasured finds, which usually she can somehow find and pull out of the bag's opening no matter what size or length the item inside seems to be.

In modern times, Zealot helped found a team of warriors, the WildC.A.T.s., to fight the Daemonites. When the original team appeared to have been killed, Kenesha (now calling herself Savant) joined forces with another Kherubim, Majestros (a.k.a. Mr. Majestic), and formed a new team to carry on their legacy. At the time both Savant and Majestic were oblivious to their relation to one another. The team was however short lived, but Savant stayed with and helped out the WildC.A.T.S. on occasion. She also had a brief romantic relationship with the new recruit TAO, before breaking up with him after realizing he had been manipulating her into loving him.

Savant later joined forces with Zealot and Majestic to fight Nemesis, who urged Zealot to reveal the truth about Savant's parentage. Zealot later revealed the truth to both Savant and Majestic after Lady Harmony's death while battling an evil plot by the Shapers Guild to recreate Khera on Earth using a device known as the planet shaper. She recently worked with Jodi Slayton (then calling herself Backlash), teleporting the younger adventuress and acting as her command and control back at base during a mission to retrieve and eliminate data from the base of Stormwatch.

Savant and Jodi were confronted by Nemesis, asking for help after Void had shown her a future where Armageddon had come to the world. The three went on an information gathering adventure that took them to The Authority's ship the Carrier, the town of Tranquility, and finally an encounter with the Wildcats. It was during a raid on a Number of the Beast facility that Zealot, believing Savant to be dead, let slip the truth about Savant being her daughter. Savant did not seem happy about the revelation.

Following the World's End, Savant sought shelter with Majestic, but was held captive against her will in Hawaii amidst Majestic's self-proclaimed utopia called New Khera. Savant's imprisonment was used by Majestic to blackmailed Nemesis and Backlash to join him and live on New Khera. Jodi and Nemesis then secretly called the Wildcats in helping to rescue her and themselves. Zealot was the first to freed her daughter and learned from her that Savant and other women like her were meant to be artificially-impregnated to bear pure Kherubim "heirs" to Majestic's utopia. Savant and the Wildcats escaped and fled to Los Angeles while tailed by an enraged Majestic. Once arriving at Halo Tower which was invaded by Lord Defile, Lady Decadence, and Daemonites, Savant reluctantly allowed Spartan to trap Majestic and the Daemonites in Otherspace dimension. But in the process, the Halo Building exploded letting Savant and the others to believe that Majestic perish in the explosion. However, after the Wildcats left, Majestic survived, but didn't chase after his daughter and the Wildcats.[2]

Traveling along with the Wildcats, Savant and the team reunited with John Lynch and Team 7, which they offered them to team up in stopping Savant's ex-lover Tao, who plans in becoming a mad god. Savant also learned from Lynch that Tao was responsible for Majestic's madness which fueled her to join in Lynch's crusade and blaming him for Majestic's condition. After assaulting Tao's location in Salt Lake City, Savant angrily confronted Tao and her attempts to kill him were subsided by his powers and his charms.[3] After escaping Tao, Savant and her allies located Max Faraday and discover from him that he was responsible for the "rapture" of millions of normal humans during Armageddon. In a second battle against a god-like Tao, Savant and the others gained the power of the Creation Wheel. However, Tao is still stronger against them and having Savant and her mother manipulated into fighting against each other while Majestic tries to prevent them.[4]