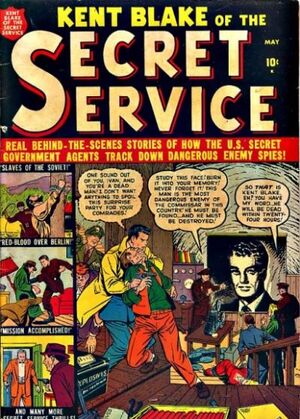 Appearing in "The Death Trap!"Edit

Synopsis for "The Death Trap!"Edit

In January of 1951, Kent Blake takes down a gang of communists spies who are hiding out in a warehouse. On the 14th the National Board chairman Herbert Maxwell is scheduled to be the star witness of at a trail over the captured Communists. At his office Maxwell is visited by his colleague Christopher Trotter talk about the importance of the case as it will instill the public with trust that those who betray their country will be persecuted.

However, at a trial the next day Maxwell shocks those gathered when he suddenly proclaims that the accused spies are loyal Americans and innocent of any crimes. Christopher is shocked and denounces him as a traitor to his country, going so far as even slapping Maxwell in the face. The spies are soon exonerated and released and Maxwell begins doing speaking engagements at pro-communism rallies. At their next meeting Trotter accuses Maxwell of being a traitor and vows to Maxwell that he will have him charged for betraying his country.

Kent Blake has been assigned to investigate the situation and later meets with Trotter at home and learns what he can about Maxwell's sudden change in behavior. Kent decides to stake out Maxwell's home to find out what is going on. While pretending to be changing his tire across the street, Blake is surprised when Trotter arrives at Maxwell's house. Spying through a window, Kent witnesses Trotter -- the real spy -- injecting Maxwell with a drug that makes him follow Trotter's commands. With Maxwell under his control, Trotter orders him to confess to stealing secret government plans and then leaves.

Blake follows after Trotter but there are spies who are onto him and knock Blake out. Trotter orders his minions to take Blake back to their hideout to deal with later. As they plot to have Maxwell confess to his crimes. Reviving in another room, Kent Blake breaks free of his bonds and finds the drugs that the spies have been injecting into Maxwell. Suspecting that they might do the same to him, Blake empties them and fills them with water. When the spies enter the room, Blake pretends to be knocked out still and they inject him with the water. Kent then plays along when they try to program him to further implicate Maxwell of the crimes they plan on framing him with.

The next day at the trial, it appears that Blake is about to go along with the plan, but he suddenly exposes Trotter. Trotter tries to escape and is shot by Kent Blake. When they turn him over they find him dead and that the cause was hypodermic needles in his coat pierced him directly into his heart. Maxwell is cleared of all charges and Kent Blake is commended for his job.

Appearing in "Merchants of Death"Edit

Synopsis for "Merchants of Death"Edit

Mr. Kruger puts Kent Blake and an assignment to crack down on American sea merchants who are selling supplies to the Chinese, an activity that is detrimental to the war effort in Korea. Kent accepts the mission and flies off to San Francisco where he poses as a sailor to monitor a ship called the Raven which is strangely being loaded with pigs.

Going to the nearby Bloody Bucket Saloon, Kent beings asking one of the crew members of the Raven about the pigs but his boss Captain Barto silences him with a punch in the face. Kent then fights off Barto who is impressed with Blake's fighting prowess and offers him a job on his ship. Blake accepts the job and soon he finds himself aboard the ship as it shoves off for Asia.

Left to his own devices, Kent begins snooping around the cargo hold and finds that crates claiming to be powdered eggs really contain gunpowder. However, Barto has been suspicious of Blake and has sneaked up on him and knocks him out. When Blake revives he finds himself locked in the hold of the ship near the pigs, leaving him to wonder what the swines have to do with the strange shipment. Later Barto comes to give him his last meal and informs Blake that he will be shot and dumped overboard. Barto gives his shipmate Squinty the gun and orders him to kill Blake. However, Blake convinces him to work with him instead, and they fake his death and dumps a fake body overboard.

Kent then hides out on the ship and witnesses feeding the pigs capsules of dope which they smuggle past customs and into China. Blake knocks out Barto and he and Squinty then call the Coast Guard and turns him over.

Appearing in "He Laid Down his Life!"Edit

Synopsis for "He Laid Down his Life!"Edit

Appearing in "The Chosen Few"Edit

Synopsis for "The Chosen Few"Edit

Appearing in "The Man Without a Face"Edit

Synopsis for "The Man Without a Face"Edit

Kent Blake is investigating a rash of counterfeit bills, and in a meeting with Mr. Kruger suspects that Lucient Lorent the so called "Man Without a Face" is responsible even though he is currently in jail. They decide to go and check out Lorent's jail cell and find out hollowed out books that once contained money plates and chemicals that were fashioned in the prisoner's sink. When they confront Lorent with what they learned, he refuses to talk, revealing that he only has a month to live.

Back at square one, Kent Blake goes back undercover to try and find out where the phony money is coming from. When the usual surveillance doesn't work, Kent comes up with a new plan: With fifty thousand dollars of government money he goes deep undercover as Left Rafts. He goes to San Francisco and earns a reputation for himself before returning to the east cost. There he begins spending a lot of money and attracts the attention of a shady woman named Lulu Pastel who owns a casino in New York City. He learns that she is in league with the counterfeiters. Kent makes a deal to buy $50,000 worth of phony money. That night he is visited by some men who agree to the deal and they agree to pick up Blake the next morning.

The next day, Kent informs his superiors of the plan and a car is sent to tail the counterfeiters to their hideout, but the crooks have a car to block and potential tails along the path. Blake is brought to the hideout where the counterfeiters get a call from their boss who informs them that "Left Rafts" is really a government spy. The crooks knock him out and their boss, Lulu Pastel arrives. Before they can eliminate Blake, the feds arrive and gun down the men but Lulu escapes to the roof. Kent follows after her and is attacked by Lulu who reveals that she is Lucient Lorent's daughter. In their struggle, Lulu stumbles off the side of the building and falls to her death.

Retrieved from "https://heykidscomics.fandom.com/wiki/Kent_Blake_of_the_Secret_Service_Vol_1_2?oldid=1439423"
Community content is available under CC-BY-SA unless otherwise noted.