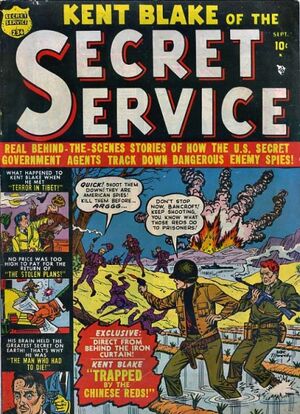 Appearing in "Terror in Tibet"Edit

Synopsis for "Terror in Tibet"Edit

On October 6, 1950 a pair of Chinese soldiers parachute into Tibet for the purposes of eliminating the Great Llama, and as one of the agents resembles the religious leader, to take his place in order to turn the Tibetans against their American allies. Sneaking into the Llama's temple at night they murder the peaceful man in his bed, leaving the Chinese spy open to take his place.

Months later on December 15, Kent Blake is called into the office of Mr. Kruger who informs Blake that his next assignment will take him into Tibet to learn why the Great Llama, originally a peaceful man, has suddenly changed his ways and has been preaching a holy war on the west. Kruger tells Kent that he is to try and convince the Llama to call off his "Jihad of Hate" before it inflames people across the continent of Asia and spread into a war across Europe and into the United States.

The next day, Kent Blake is flown out of Washington D.C. destined for Tibet. Over the Asian continent they are attacked by Chinese fighter planes and his pilot is fatally shot by their fire. The plane crashes, but an injured Kent Blake survives the crash and crawls out of the burning wreckage. Although he gets clear from the crash, he is knocked unconscious when the plane explodes. When Kent comes around he finds himself being cared for by some Tibetan men who have hidden him from Chinese soldiers. He learns that one of the men is the Great Llama's brother, Nai Dali who has been transporting them to the temple in order to hear his brother's speech and expresses his concern with his sudden change in sentiments towards the west and how he has denounced his previous teachings of peace.

Nai Dali hides Kent Blake in a basket until they reach the temple of the Llama. There the Llama's brother meets with the "Great Llama" and realizes that he is an impostor. The other Chinese spy covers his mouth to stop him from revealing the truth and Kent Blake's hiding place is soon found and he too is taken prisoner. When the impostor orders Kent and Nai Dali to be killed, Blake fights the soldiers off. Seizing a gun from one of the guards, Kent shoots his attackers. Dying the impostor tells Nai Dali that they murdered his brother and that failure for the Great Llama to make his speech, the people will be inflamed into a bloody war.

With the speech scheduled to commence in moments, Kent Blake convinces Nai Dali to takes his slain brothers place and explain to the people what happened and tell them to continue living their peaceful lives. Surprisingly the honest speech pays off and the masses disburse to resume their normal lives. The new Great Llama thanks Kent Blake for all his help and the American Secret Service Agent flags down an American plane passing by and returns home to the United States with his mission accomplished.

Appearing in "The Stolen Plans"Edit

Synopsis for "The Stolen Plans"Edit

Miss Corbet employed by the late Doctor Barnett who had developed a new tank weapon has called on the Secret Service after her employer was murdered. Examining the plans both Mr. Kruger and Kent Black notice that the plans had been tacked up, suspecting that some spy must have photographed them. Suddenly, Miss Corbet spots someone at the window with a gun and gets everyone down before they can be shot. With the assassin having botched their job, they flee without a trace. When Kent offers Miss Corbet a cigarette to calm her nerves, she refuses telling that she does not smoke.

Putting a guard on watch for Miss Corbet, Kent and Mr. Kruger return to their office to discuss matters. Kruger tells Kent that he suspects that a spy known only as the Cat, who was last active in France, is the likely suspect in this case telling Blake that the Cat was reported entering in the United States a short while ago. They meet with Paul Levalle, a French government agent sent to the United States to try and track down the Cat. The two decide to start looking at a hotel in downtown Washington where foreign agents are known to hang out. After staking out the hotel for hours, the two counter-espionage agents are about to give up when Kent recognizes a man entering the hotel as a top Communist agent. Kent then follows the man in and witnesses as he purchases a pack of cigarettes. Deducing that this might not be such an innocuous transaction as microfilm could be hidden in a pack of cigarettes, Kent Blake decides to follow the spy. However, the Communist agent realizes he is being followed and tries to shoot at Kent when they pass through a tunnel. Blake is a faster shot however and he manages to fatally wound the spy. When he refuses to talk, Kent takes the cigarettes but before he can inspect him, somebody pistol whips him from behind.

Kent is revived shortly afterward by Lavalle and find the pack of cigarettes missing. Searching the dead man's body they find train tickets to Canada. The two men return to the Secret Service where Kent arranges for tickets for himself, Lavalle and Miss Corbet to go to Montreal. On the train, Kent and Miss Corbet go outside offers Miss Corbet another cigarette, but when she reminds him he doesn't smoke he asks her why she has a pack in her purse. Suddenly Laval comes up from behind and sticks a gun into Blake's hand. "Lavall" reveals that he is really the Cat and that the real Lavalle was murdered and replaced. He orders Blake to hand over the cigarette pack, but Kent quickly turns and punches Lavalle out sending him off the train to his death. When Miss Corbet tries to sweet talk her way out of trouble, Kent Blake tells her that she is going to pay the price for betraying her country.

Appearing in "The Man Who Had to Die"Edit

Synopsis for "The Man Who Had to Die"Edit

Appearing in "Under the Red Flag!"Edit

Synopsis for "Under the Red Flag!"Edit

Appearing in "Nightmare in China"Edit

Synopsis for "Nightmare in China"Edit

Smuggled into China via submarine, Kent Blake infiltrates the country on a mission to meet with General Wing of the Nationalist resistance army who is fighting against the Communist government. After narrowly avoiding capture by Chinese soldiers, Kent goes over the next ridge and runs into an American soldier of fortune named Sam Bancroft. Bancroft identifies himself as working with the Nationalists and that they should wait until dark before they move. Kent questions why Bancroft would work for the Nationals when the Chinese government would pay him more for working for them. Sam explains that the government would have paid him in lead, and that General Wing allowed him to loot enemy bases after attacks until the resistance movement was forced to go underground.

Blake doesn't fully trust Bancroft and sends him ahead when it's time to move. However, Bancroft proves his allegiance when they are spotted by Chinese troops that open fire on them by shooting back. They manage to escape the soldiers and sneak back to General Wing's secret hideout located in an abandoned farm house. Kent Blake meets with General Wing and sends a message from Washington asking the gorillas to attack the Communist forces, but Wing informs him that they do not have the needed supplies to make an assault. However, Kent convinces him to engage in gorilla warfare and learns of where their troops and planes are located.

Kent beds down for the night so he can rendezvous with his sub in the morning but his awoken later when the Chinese attack the base and begin bombing the planes hidden there. Learning that his sub is waiting for him, Blake rushes out to meet it and arrives just in time to see it blown out of the water by Chinese bombers. Wing catches up to him and asks Kent to assist and leads him back to base. When they return, Wing accuses Bancroft of being a spy and orders him executed, but Blake pleads him to let Sam defend himself. However, just as Bancroft is about to be executed a soldier returns and informs them that their hidden tanks are being bombed. Realizing that Wing was the only one who knew where the tanks were hidden, Blake realizes that General Wing is really the traitor.

Hopping into an armored truck, Blake drives into the path of the firing squad saving Bancroft's life. Wing then admits that he is really a Communist spy but gloats over the fact that his troops don't know as he is speaking in English and they don't understand the language. Suddenly, Chinese bombers begin attacking the secret base and Wing attempts to make a break for a plane. Blake jumps onto the wing of the plane and as he struggles with Wing, Bancroft -- who hopped onto the other wing -- fires a shot that kills the traitor. With Wing dead, Blake convinces Bancroft to return to the resistance and lead them. Agreeing to do so, Bancroft parachutes out of the plane and Kent turns the plane around and returns back home.

Retrieved from "https://heykidscomics.fandom.com/wiki/Kent_Blake_of_the_Secret_Service_Vol_1_3?oldid=1439426"
Community content is available under CC-BY-SA unless otherwise noted.