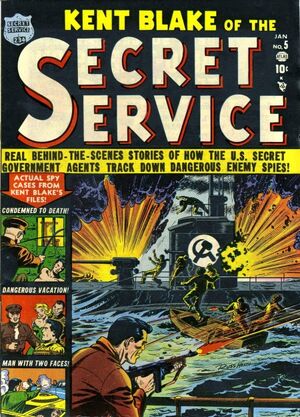 Appearing in "Condemned to Death!"Edit

Synopsis for "Condemned to Death!"Edit

March 27, 1950 a train carrying food and medical supplies through Greece is derailed thanks to the sabotage of communist spies.

A week later in Washington D.C., Mr. Kruger calls upon agent Kent Blake to inform him of the acts of sabotage and asks him to go out to Greece and assist Captain Danos of the Greek Special Police in stoppinng who is responsible. Kent takes a ship out to Greece and arrives in April 1951, he finds an group of anti-American protesters waiting for him who believe at the United States are stealing the supplies to sell on the black market.

Kent is helped out of the mob by Captain Danos and is introduced to his right hand man Demitrios. Blake is driven to the nearby prison where the leader of the attackers -- Charnoff -- and some of his men and hope that they can learn when the next attack is going to be. In order to learn this information, they will have Kent Blake pose as a communist spy and place him in with the other prisoners and gain their confidence. The only people who will know of Blake's double identity are Danos and Dimitrios.

Later, Danos turns Blake over to the warden of the prison, under orders that he is to be executed on May 1st. As he leaves he is shot dead by an unknown assailant, leaving Kent to fear that unless Demitrios shows up to get him out, he will be executed. For days Blake remains in prison with no sign of Demitrios. On the last day of April, Blake is taken to the warden to prepare for his execution and learns to his surprise that the warden is in league with Charnoff and that they knew about the plot and have every intention of hanging Kent the following morning. But first they try to get information from Blake by whipping him into submission. However, despite the torture, Blake refuses to talk. They lock Kent back up and begin plotting their revolution.

The following morning, when the guards come to execute Kent, he is shocked to see that Demitrios is one of the communist spies. However before Blake can be taken out of his cell, a British spy named Bascomb who has infiltrated the communists hands him a gun. The two easily gun down the communists and recover a book containing a list of names of communist spies in the region. With this list they are able to stop more acts of sabotage. When Kent Blake returns home for America, he is celebrated by the people of Greece.

Appearing in "The Man With Two Faces!"Edit

Synopsis for "The Man With Two Faces!"Edit

Kent Blake travels to the Balkan nation of Holtzenburg where he meets with the US ambassador Lawrence Carter to oversee the current election between the dictator Stefan Kallescu and his opponent Tolstan Fernak who wants to establish a democracy under US guidance. American interests lie in allowing Tolstan to win the election as the government controlled plutonium mines would ship uranium to the United States instead of the communists.

When Blake meets with Tolstan, he fears that the people will side with Kallescu due to their loyalty to his brother the previous ruler. Their meeting is interrupted by actor Kurt Dorashek who has a striking resemblance to Kallescu and has acted as the dictator in the play "The Golden Way". Later when Blake attempts to visit Kallescu he is driven off the road by communist agents. Blake manages to get safely out of his car and guns down the spies.

More determined than ever to see Kallescu, and sneaks onto his property. When he confronts Kallescu he learns that his wife Magda refuses to let him speak or assist him, as she is a member of the communist party. However, Kent convinces Kallescu to side with the Americans. When Kallescu's wife brings him his speech, he refuses to read it and tears it up, telling her that he will side with the Americans. In response, she shoots Kallescu, intending to make the speech herself.

Quickly, Kent calls up Kurt Doraschek who rushes to Blake's aid. Kurt then poses as Kallescu and interrupts Magda's speech. She then confesses to murdering the real Kallescu and when she tries to shoot the actor Kent Blake shoots her dead. With his cover maintained Doraschek addresses the people and urges them to vote to make the country a democracy and ally with the United States.

Kent Blake is about to go on vacation when he stops in on Mr. Kruger and learns that the Secret Service is investigating a leak of information on a new experimental jet design and guided missiles that has been uncovered by Jason Grant the head of the department. Kruger tells Blake to enjoy his time off and not worry about their current case.

Kent takes his car and drives to Long Island to spend his time off with his friend Gale Whitney. When Kent arrives he is introduced to the other guests that she has over: Her neighbors Jason Grant, his wife Olga and Olga's brother Joseph Cantrell. Blake recalls Grant as the man whom Kruger believed was leaking government secrets. Gale then takes Kent out to see a nearby lighthouse that has been abandoned for years but still sometimes turns on at night. Along the way, Kent dodges all the questions Gail asks him about his line of work.

That night Kent is unable to sleep and decides to go out for a walk. He walks to the lighthouse and sees that the lights are on. He decides to go inside to investigate and someone attacks him from behind, pistol whipping him from behind and knocking him out. When Kent wakes up he finds Gloria standing over him. When he asks her how he found him, and she explains that she hear him wake up and followed him. Kent finds this suspicious as well. Kent then spots a cigarette lighter on the ground with the letters "J.G." monogrammed on them. He tells Gloria to return to the house and fix them some drinks and that he will join her soon.

Kent then pays a visit to the Grant house and finds that his wife and brother-in-law are using hypnosis on Jason in order to learn defense secrets. Kent follows them back to the lighthouse where he sees that they are using the lighthouse to send messages to a Chinese submarine that is just off the shore. When Kent tries to stop them, the two spies get the drop on him and hold him at gunpoint. The leader of the Chinese sub comes to shore to collect the secrets. Before they can eliminate Blake, Jason arrives and gets the drop on them, leading to a standoff. However, before anything can happen Gloria rushes into the room causing a fire fight to occur. In the crossfire Jason and his wife are fatally shot. Kent takes control of the situation then orders Gloria to rush to her house and call the coast guard and warn them of the enemy sub in American shores. Planes are dispatched to bomb the sub and the authorities take the communist spies away. After all is sed and done, Kent returns to Washington D.C. to report back for duty.

Retrieved from "https://heykidscomics.fandom.com/wiki/Kent_Blake_of_the_Secret_Service_Vol_1_5?oldid=1439432"
Community content is available under CC-BY-SA unless otherwise noted.