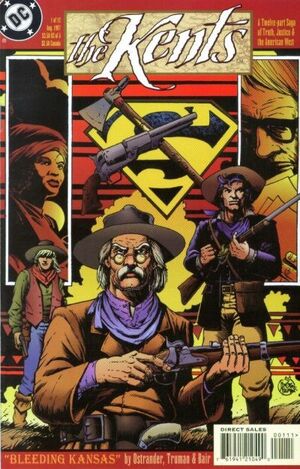 You've always understood the importance of stories, Clark, and knowing where you came from is very important to you. I've always admired that.

Appearing in "Bleeding Kansas (Part I of IV)"Edit

Synopsis for "Bleeding Kansas (Part I of IV)"Edit

The Present
Jonathan Kent is digging around in the old barn when he comes upon a buried box filled with letters and memorabilia. He discovers that these once belonged to his ancestors who moved to Kansas in the mid 1800s. Jonathan begins making copies of the letters and mails them to Clark and Lois.

1854
Kent family patriarch Silas Kent receives an invitation to join the Emigrant Aid Society and relocate to the territory of Lawrence, Kansas to assist with the abolitionist movement. Silas brings his two oldest sons, Nate and Jeb with him and journeys west towards Kansas.

Upon reaching Missouri, the Kents meet fellow abolitionist Charles Robinson. Robinson warns them of the feuds taking place in the territory, mostly over the proposed Kansas-Nebraska Act which threatens to bring Kansas into the Union as a slave state. There are many pro-slavery activists in Missouri who threaten the peace, not the least of which is the outspoken Luther Reid. The Kents meet Luther Reid and it becomes clear to both parties that there are troubled times ahead.

The Kents finally arrive in Lawrence, and Silas sets up a small print shop. He begins publishing an abolitionist newspaper called the Plains Speaker. In the winter of that year, he meets a political activist named John Henry Lane (an ancestor of Lois Lane).

Nate and Jeb Kent seem to have varying points of view when it comes to politics and the increasing tension in the Kansas legislature. Nate is committed to the ideals of their father, but his commitment is tempered with a sober understanding of the complexities involved. Jeb shares his family's anti-slavery views as well, but his glib attitude seems to be born more out of rebellious youth than any true concern for the current political structure.

The Kents' presence causes quite a stir in Lawrence and they find themselves clashing with Luther Reid and pro-slavery sheriff Sam Jones on more than one occasion. Silas Kent attends the Free-State Legislature and voices his outrage over the manipulation of the voting ballots. That evening, as he is returning home, Silas Kent is shot in the back by an unknown assailant. He dies soon after. Nate and Jeb immediately suspect Luther Reid, but Reid has already curried the favor of the town sheriff. The sheriff has no intention of arresting Reid or even investigating the murder of Silas Kent.

Retrieved from "https://heykidscomics.fandom.com/wiki/Kents_Vol_1_1?oldid=1438956"
Community content is available under CC-BY-SA unless otherwise noted.