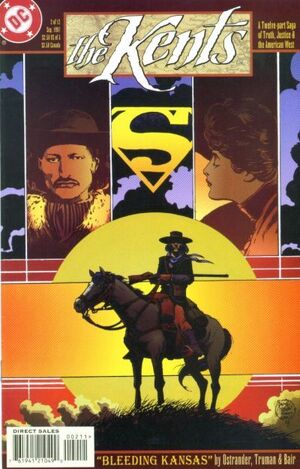 Wake up, you Missouri pukes! Jeb Kent's riding through! Yaaah!

This story is presented as a series of letters read by Jonathan and Clark Kent.

1855
Luther Reid is angry that the Kent brothers have accused him of murdering their father. He tells sheriff Sam Jones that young Jeb Kent even threatened his life. Luther and Jones ride out to the Kent homestead and arrest Jeb Kent. They tie him to a horse and bring him down to Blanton's Crossing where they intend on hanging him. Jeb's brother Nate shows up and levels a sharps rifle at the two men, forcing them to let Jeb go. Nate knows that the feud between the Kents and Luther's men will only get worse.

As Winter wears on, Luther's Missourians become more aggressive. There is talk that they might even lay siege to Lawrence, just to route out the abolitionists. Charles Robinson meets with Nate and Jeb and they stand ready to defend their home should Luther's men make a move. To make matters worse, the outspoken abolitionist John Brown comes into town, preaching his gospel. He is accompanied by a group of Delaware and Shawnee Indians. Nate suggests making a plea to governor Shannon to send Federal troops so Luther's men will have to stand down. Robinson agrees and sends two volunteers to accompany Nate to the governor's office. Jeb takes it upon himself to accompany him and the boy's recklessness irritates his brother. Their message reaches Governor Shannon who sends troops to settle the situation in Lawrence.

1856
In March of 1856, Jeb and Nate receive a letter indicating that their mother Abigail has passed away. Nate leaves Jeb in charge of the print shop and travels to Boston to collect his mother's remains. He brings them back to Lawrence so that she can be buried next to her husband. On the trip back home, Nate meets Wild Bill Hickok. Wild Bill helps Nate sneak past a group of Missouri border ruffians.

A few days later, Nate Kent is asked to join the Free State Legislature in Topeka. They want him to serve as their delegate to Washington. Nate brings his case before President Franklin Pierce, but Pierce buckles from political pressure and cannot ratify the proposed constitution which would make Kansas a free state. Nate Kent, Charles Robinson and John Henry Lane argue their case before Senator Charles Sumner. Sumner pledges to make an argument on the floor of the Senate.

Moments later, Nathaniel receives a letter from Jeb. Luther Reid's gang has incited a riot in Lawrence and Jeb has been fighting to defend the town. Nate mounts his horse and rides back towards Kansas.

Retrieved from "https://heykidscomics.fandom.com/wiki/Kents_Vol_1_2?oldid=1438958"
Community content is available under CC-BY-SA unless otherwise noted.