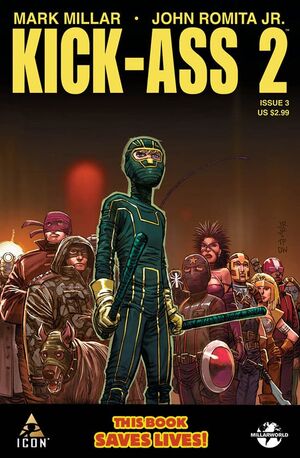 Beginning immediately after the events of the previous issue, Kick Ass and Justice Forever interrogate the runner of a local prostitution ring. The team frees the prostitutes and releases them to support group workers, along with the money they stole from the criminals.

Kick Ass then narrates the good deeds Justice Forever becomes involved in, the group becoming more recognized by the public as they involve themselves in charity work. By their example other heroes start joining them including Long Island Rocket-Man, the All-Seeing Eye, Moon-Bird, and the Enforcer. Dave also tries to recruit his friend Todd (who can't seem to come up with a name not wildly derivative of Dave's identity as Kick Ass) and Hit Girl who refuses on the grounds of keeping her promise to her parents.

Dave's father discovers his Kick-Ass costume and instigates a confrontation that ends with Dave running out of the house in anger.

Meanwhile The Colonel is assaulted in the Justice Forever lair by a gang of 'super-villians' called the 'Toxic Mega-Cunts' led by non-other than Red Mist. After being shot in the stomach and beaten badly Red Mist and his gang pose the deceased corpse of The Colonel up in a chair for the cops to find with the decapitated head of beloved dog Sofia pulled over his face like a mask. On the wall written in blood is the message "RED MIST IS DEAD - LONG LIVE THE MOTHER FUCKER'.

The issue concludes with Hit Girl watching the discovery of The Colonels body on the news,

The character of Moon-Bird may be a reference to real-life superhero Terrifica who has a similarly helps inebriated women.

Retrieved from "https://heykidscomics.fandom.com/wiki/Kick-Ass_2_Vol_1_3?oldid=1439468"
Community content is available under CC-BY-SA unless otherwise noted.