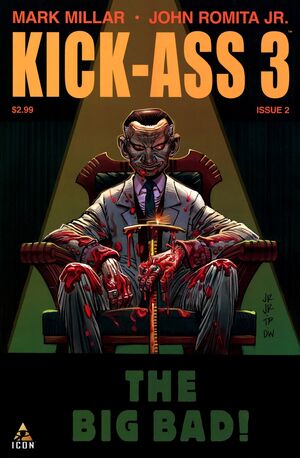 Uneasy lies the head that wears the crown…and that goes double for the cowl! Kick-Ass is now leading the reformed superhero team Justice Forever…just in time to face some terrifying new foes. But there’s dissension in the JF ranks; will he be able to fend off a coup with Hit-Girl still in prison? Meanwhile, a broken Red Mist gets some tough love from Mommie Dearest.

Retrieved from "https://heykidscomics.fandom.com/wiki/Kick-Ass_3_Vol_1_2?oldid=1439488"
Community content is available under CC-BY-SA unless otherwise noted.