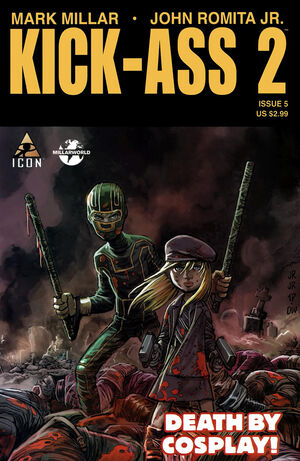 For Dave Lizewski and the self-made superheroes of NYC, sh*t just got really real. The Red Mist, now known as the Mother****er, has assembled his own team of Toxic Mega-***** and they're striking the heroes where they're most vulnerable: Their loved ones. If Kick-Ass wants to put a stop to the supervillain rampage, he's going to need the help of Mindy McCready, the one and only Hit-Girl.

Retrieved from "https://heykidscomics.fandom.com/wiki/Kick-Ass_Vol_2_5?oldid=1439510"
Community content is available under CC-BY-SA unless otherwise noted.