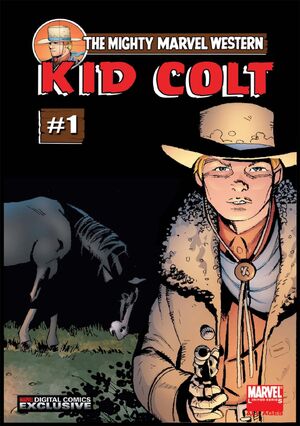 Appearing in "Kill the Kid!"Edit

Framed for murder, Blaine Cole, one of Marvel’s original western heroes saddles up to ride again as KID COLT! Against a deadly bounty hunter, a corrupt Sherriff and the scavengers of the west, odds are against the Kid and his ally, the steady-shooting Everrett Hawkmoor. But that’s the way they like ‘em. By Tom DeFalco (AMAZING SPIDER-GIRL) and Rick Burchett (SHE-HULK).

Retrieved from "https://heykidscomics.fandom.com/wiki/Kid_Colt_One-Shot_Vol_1_1?oldid=1439545"
Community content is available under CC-BY-SA unless otherwise noted.