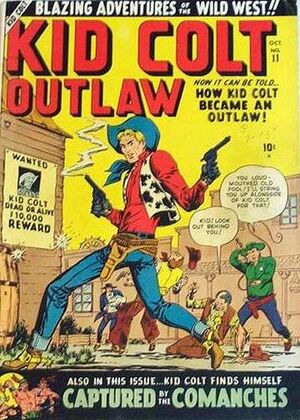 Appearing in "How Kid Colt Became an Outlaw!"Edit

Synopsis for "How Kid Colt Became an Outlaw!"Edit

In the town of Purgatory, the law is run by a ruthless sheriff and his deputy Lash Larribee. One day, when Lash is beating up on a local named Gabby, his friend Blaine Colt comes to his aid. Blaine is easily beat down by Lash who mocks Colt for not carrying guns. The fight is then broken up by the sheriff who orders Blaine to return home with Gabby. When Kid and Gabby return to the Colt ranch, Blaine tells his father what happened. Disgusted by his son's cowardice for not carrying guns, he goes into town to deal with Lash despite Blaine's protests. As Blaine and Gabby walk the ranch he explains his brother Slim was a great gun fighter who taught Blaine how to shoot. He explains that when Slim was killed Blaine vowed never to shoot a gun at a man. Suddenly they are attacked by a puma, and Blaine grabs hold of a gun shooting it dead, Gabby is amazed by Blaine's shooting prowess.

The next morning as Blaine is waking up he is suddenly confronted by the sheriff who accuses him of killing his father. The sheriff explains that his father lost his ranch gambling to him and that Blaine murdered him after they argued about it. Denying the entire thing, Blaine is soon arrested and finds himself locked in the town jail. Left in the jail with Lash Larribee watching over him, Blaine tricks Lash to get close enough to the cell to break free. He then ties up Lash, takes his fathers guns and heads to the local saloon to confront the sheriff. When the sheriff and his men try to draw on him, Blaine shoots the guns out of their hands and then takes the sheriff hostage. He then takes him nearby while a posse goes out looking for him.

Meanwhile, Lash breaks free and gets the drop on Blaine before he can kill the sheriff and begins whipping the boy. Blaine manages to turn things around and gets a hold of Lash's whip and begins whipping his attacker when Gabby shows up. The sheriff then shoots both Gabby and Lash dead. But before he can shoot Blaine, who he calls "Kid Colt", Colt jumps him. During their fight, a single punch from Blaine knocks the sheriff off a cliff and sends him falling to his death. Now an outlaw without a way to clear his name, Blaine takes on the name Kid Colt and rides out of town.

Appearing in "Paid in Full"Edit

Synopsis for "Paid in Full"Edit

Appearing in "Captured by Comanches"Edit

Synopsis for "Captured by Comanches"Edit

For the past two years US Marshall Bulldog Crandall has been trailing after Kid Colt. Once more his hunt lands him at Kid Colt's camp just hours after he left and finds a mocking message from the outlaw. Crandall vows to get capture Kid Colt no matter what, as he always gets his man. He heads toward the town of Thunder Rock unaware that Kid Colt is watching and following him.

He pulls into the nearby saloon where he begins talking to the locals about his hunt for Kid Colt. Unaware that Kid Colt is sitting the saloon listening in to his boasts, the Marshall buys a round of drinks for everyone to toast his future capture of Kid Colt. On his way out, the Marshal is approached by a boy who gives him a quarter, telling him it's from Kid Colt who wanted to thank him for the free drink.

Furious, the Marshal continues his hunt for Kid Colt and is observed by a pair of Comanches who want revenge for the harsh justice that Crandal has doled out on them over the years and plot to kidnap his daughter. Shortly thereafter, Crandal is confronted by one of the locals who warns him that Comanches have captured his daughter. Torn between pursuing Kid Colt and rescuing his daughter Elle, Crandal decides to give up his hunt and rescue his daughter, unaware that Kid Colt is still watching.

When confronting Comanche braves, Crandal is hit with an arrow and downed. Finding him still alive, the Comanches take him prisoner, planning to burn both Bulldog and Elle at the stake. Kid Colt decides that this is horrible fate and resolves to rescue the captives. Tethering up Steel, Kid Colt then gets the drop on one of the Comanches and steals his bow and arrow. He then uses a flaming arrow to set the Comanches' teepees on fire. In the confusion, Kid Colt then rescues Bulldog and Elle and covers their rear as they escape the attacking Comanches.

In the aftermath, Bulldog realizes the errors of his ways and decides to quit at being a US Marshall. Months later as Kid Colt is passing through Windy Gap he is surprised to see Bulldog Crandal at his new profession: a preacher.

Retrieved from "https://heykidscomics.fandom.com/wiki/Kid_Colt_Outlaw_Vol_1_11?oldid=1439560"
Community content is available under CC-BY-SA unless otherwise noted.