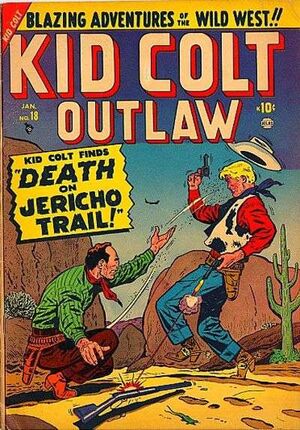 Kid Colt has camped out for the night after another day on the run. Both he and his horse Steel are uneasy when, suddenly, Doc Shores and his gang get the drop on him. Shores explains that he and his men need money in order to leave the territory, and have decided to take in Kid Colt for the reward on his head. When Kid Colt points out that the sheriff would not tolerate outlaws of any kind, Shores tells him that he overheard the sheriff say that he would rather have Kid Colt's head over that of any other outlaw, and they intend to trade off Kid Colt in exchange for their own freedom.

Doc Shores then sends his youngest man, Chip Howell, to turn Kid Colt over to the sheriff in Sulfur Springs. Forced to ride on, Kid Colt begins trying to convince Chip that Doc Shores is a back-stabbing killer. Chip does not want to listen until Kid Colt recalls his name. The Kid recalls there was once a family named Howell who was wiped out by Shores and his gang. When he mentions the name of Clem Howell, Chip decides to untie Kid Colt and listen to the rest of the story. Kid Colt explains that about two years ago he was riding the Masabi range, and decided to stop in on his old friend Clem Howell. When he arrived at the ranch he found that Clem had been shot by a .45 caliber bullet and his ranch set aflame. Dying, Clem Howell told Kid Colt how Doc Shores and his men came to the ranch posing as a US Marshall, looking to get fresh horses. When Clem called him on it, they shot him, stole the horses they needed and set his ranch on fire. Clem died asking Kid Colt to find his son and tell him what happened, but died before he could tell him the name of his son.

When his story is finished, Kid Colt is told by Chip that he is the son of Clem Howell. Broken up, Chip realizes that Doc Shores manipulated him into joining the gang, knowing full well that he had murdered his father. Chip then lets Kid Colt go and the two agree to eliminate Doc Shores and his gang. Chip tells him that the gang had decided to split into two while waiting for the reward money, one group in Lavorca and the other Conchise.

Chip and Kid Colt ride into Lavorca and find members of Doc's gang in the local saloon; the pair gun the entire group down. However, they are caught off guard by Doc Shores and the rest of the gang, who, suspecting a possible betrayal, had been waiting in hiding. Another shoot-out takes place, and Chip is fatally shot, but before he dies he shoots Doc Shores dead. When the sheriff and his men arrive to arrest those left standing, Chip holds them at bay, while Kid Colt jumps out of the window and flees, sacrificing his life so that Kid Colt might escape.

Appearing in "Riot in Jericho!"Edit

Synopsis for "Riot in Jericho!"Edit

While riding across the Marcos Trail, Kid Colt spots a gold coin laying on the hard pan and picks it up. As he continues to along the way, he finds more coins and realizes that someone must be dropping them, and decides to return them to their owner. He follows their trail and tries to stop them men to give the gold back. In a panic they turn and shoot at the Kid, but Colt easily disarms them. They then admit that they robbed the bank in Jericho. Having decided that it is more trouble than it is worth, the outlaws decide to turn it over to Kid Colt, and ride off before Kid Colt can stop them.

Kid Colt realizes that the would-be robbers had stolen the entire net worth of Jericho, and decides to return the money to the bank. This, of course, proves to be a challenge due to Kid Colt's outlaw status, and as soon as he rides into town the locals assume that he has come to rob the town. He finds opposition as he rides to the bank, but thanks to his fast thinking and Steel's grace he manages to get past all his opposition. Then in front of the shock onlookers, he returns the stolen money to the bank and then rides off as quickly as came. The local law decides to let Kid Colt go free for his efforts.

Appearing in "The Curse of Boot Hill"Edit

Synopsis for "The Curse of Boot Hill"Edit

Appearing in "The Sheriff of Six-Mile Creek!"Edit

Synopsis for "The Sheriff of Six-Mile Creek!"Edit

Along the Sangre de Cristo trail, Kid Colt sees a wagon train of people fleeing the town of Six-Mile Creek, one of the few towns where he is not considered an outlaw, and is friends with Sheriff Matt Stevens. He learns from those leaving the town that apparently Matt Stevens has changed his ways, and allowed the outlaw Sierra Kane and his gang to take over the town, forcing everyone out. Kid Colt decides to go into Six-Mile Creek to determine what has come over his friend.

When he rides into town, two of Sierra Kane's minions spot him and decide to take his guns and his horse. Kid Colt easily beats the men senseless, and learns that their leader is in the local saloon. The Kid confronts Kane there and it leads to a fight, ending with Kid Colt gunning down some of Kane's men before Sheriff Matt Stevens arrives, getting the drop on Kid Colt and taking him prisoner. Kid Colt is shocked to see the truth, that his friend is working with an outlaw like Sierra Kane. Colt is taken prisoner, with the outlaws planning to hang him in the morning.

Kid Colt finds himself disarmed and locked away in the town jail. Finding a crack in the wall to the next cell, Kid Colt see that someone on the other side is trying to get his attention by pushing a piece of straw through. Using one of his spurs like a primitive shovel, Kid Colt digs through the dirt floor of his cell into the next cell and is shocked to find Matt Stevens inside. As it turns out, Stevens was imprisoned by an impostor working for Sierra Kane. He explains that the only people in town who know are the Halliday family, and that they have been sending their youngest son Cal to bring him extra rations. As it turns out, he had ordered Cal to bring him some six-shooters this evening after learning that the Kid had been arrested.

When Cal delivers the guns, Kid Colt refills the hole he dug into Matt's cell and hides out in there with the guns. The next morning when the impostor notices that Kid Colt is gone, they go to question the real sheriff to see what he knows. Instead of answers they get hot lead, as both Stevens and Kid Colt open upon on their captors. Kid Colt and Stevens then get the drop on the rest of the gang, and gun them down. In the aftermath, Matt thanks Kid Colt for his help and tells him that, so long as he is sheriff, no wanted posters for the arrest of Kid Colt will ever hang in his town.

Retrieved from "https://heykidscomics.fandom.com/wiki/Kid_Colt_Outlaw_Vol_1_18?oldid=1439575"
Community content is available under CC-BY-SA unless otherwise noted.