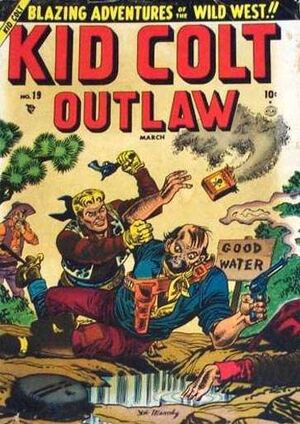 Appearing in "Revenge in Sagebrush City!"Edit

Synopsis for "Revenge in Sagebrush City!"Edit

Gambler Duke Laval and his gang are forced out of Sagebrush City by the sheriff, with no other choice, Laval orders his men to stand down and they begin plotting to take their stakes elsewhere. They move up along the Santa Fe line to the town of Pan Creek where they decide to look around. As Laval is crossing a road he is almost run down by Kid Colt riding his horse Steel. Furious at almost being trampled, Duke throws a punch at the horse, prompting the Kid to leap off his steed and whalop Laval across the face. When one of his men tries to come to the Duke's aid, Kid Colt shoots him dead. After Laval threatens to get revenge, Kid Colt introduces himself and warns the gambler not to come after him before riding out of town.

Putting Kid Colt out of his mind for the time being, Duke Laval and his men plot to heist the passengers aboard a train when the next one passes through. As Laval boards the train and prepares to signal his raiders, Kid Colt sets up camp nearby on a high ridge that overlooks the railroad. The Kid watches as Laval signals his men with a mirror from a passenger car and the outlaws riding toward the train. Kid Colt mounts Steel and rides after the train and shoots the outlaws as they try to board the cars. With the outlaws eliminates, Kid Colt hops aboard the train to face Laval alone.

He knocks Laval down and reveals to the passengers how Laval called the outlaws to attack the train, but the locals don't believe him and the Kid is forced to flee before the mob tackles him. A week later, Kid Colt rides into Sagebrush City just as a local is nailing up a wanted poster for Kid Colt. He overhears the man lament about how Duke Laval has returned to terrorize the town again and wonders why people are after the Kid instead of Laval. When Kid Colt makes his presence known the old man asks the Kid for help.

Kid Colt rides into town and confronts Duke Laval and guns him down and rides off. The old timer thanks Kid and rips down the wanted poster as the hero rides off.

Appearing in "Mystery of the Stolen Cache!"Edit

Synopsis for "Mystery of the Stolen Cache!"Edit

Kid Colt has returned to one of his secret camps and is surprised to find stash of food has been taken, the fifth such raid on his secret supplies. Finding tracks this time around, Kid Colt decides to follow after them to teach the food thief a lesson. Kid Colt follows the trail until he reaches it's end and watches in surprise as a rope trap is slung down from a nearby tree. Shooting at the tree, Kid Colt startles the person hiding in it and is once more surprised when it is a young Native American boy who falls out.

He learns that the little boy's name is Little Chipmunk, the son of Pawnee chief. The boy tearfully explains that the other children in his village have mocked him by telling him that he was never going to grow up to be a brave warrior like his father, so he decided to track Kid Colt to prove himself to the others.

Kid Colt explains to the boy that food stashes are important for a man's survival on the range. However instead of punishing the boy, Kid Colt decides to help the boy out. He allows Little Chipmunk to take him prisoner and take him back to the Pawnee camp. The Kid is turned over as a prisoner much to the shock and surprise of the children in the village. When the chief of the tribe sees his son's prisoner, he decrees that his son has proven himself as a true warrior and as it is the custom of their people allow Kid Colt to go free.

Appearing in "The Big Smoke"Edit

Synopsis for "The Big Smoke"Edit

A drought has hit the prairies making it so dry that even the slightest spark can cause massively destructive grass fires, wiping out the food and water supply for animals and Native Americans, the potential for famine forcing them to seek more fertile lands elsewhere.

Somewhere along the wastes is Boot Merrill and his gang, who are lamenting on their poor fortune. Merill comes up with an idea to start grass fires but when some of his men find this idea crazy they are shot. He tells his surviving men that they are to head out to nearby Rio Feliz to begin his plans.

Elsewhere, Kid Colt rides into the region and realizes that any sparks from Steel's hoofs could risk a fire and rides into Rio Feliz to visit his friend, a blacksmith named Jeb Chandler to have Steel's shoes removed. Suddenly, one of the members of Boot Merrill's men who was shot stumbles in, having survived he warns them about Merrill's plot to start a massive grass fire before he dies.

Kid decides to try and stop them and rides off to their location but soon sees that he is too late and that there is fire has already been started. Along the way he runs into a local Native American tribe fleeing the flames. He tells them to ride into Rio Feliz to seek cover as they can find shelter among the settlers and that if the flames where to spread there is a river where they can all seek cover.

Meanwhile, the wind changes sending the flames heading toward town, forcing Merrill and his gang toward town. Meanwhile, the Kid realizes this danger and gets the locals to seek cover in the nearby river. As the flames approach town, Kid Colt spots Merrill and his gang running to the river to seek cover and guns the outlaws down. Just when all seems lost and the town about to be ravage by flames a sudden rain storm hits putting the fire out and saving the town.

Retrieved from "https://heykidscomics.fandom.com/wiki/Kid_Colt_Outlaw_Vol_1_19?oldid=1439577"
Community content is available under CC-BY-SA unless otherwise noted.