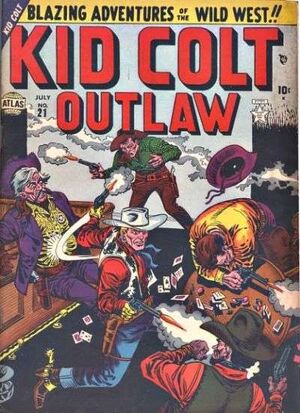 Appearing in "Wanted Dead or Alive!"Edit

Synopsis for "Wanted Dead or Alive!"Edit

An outlaw named Blackie and his gang come across a wanted poster offering $5000 for the capture of Kid Colt, dead or alive. When Manley suggests that they go after the reward, Blackie suggests that Kid Colt would be worth more than $5000 to them dead rather than alive. Blackie comes up with the idea of posing as Kid Colt to take some of the heat off of their gang as the authorities would be looking to capture the famed outlaw instead. Blackie then sends his gang out to find out where Kid Colt is currently located. In one town, one of Blackie's men questions an old man who denies that Kid Colt is in the area. However, this lie is exposed when the man's grandson comes home to show off the cartwheel that the Kid shot a bullet through.

With the Kid's location found, Blackie and his men easily track him down at night camping out in the wilderness. They start a grass fire in the hopes of burning Kid Colt alive, however the outlaw hero is awoken by the smoke. The Kid sends his horse Steel galloping out of the fire and then begins to play possum as the flames start to die down. When Blackie and his gang go to see if he is dead, the Kid suddenly springs up and begins shooting. Out numbered Kid Colt tries to flee but is shot in the back with a rifle.

Left to die, Kid Colt comes out of unconsciousness under the care of some Native Americans who took the wounded outlaw back to their village to heal. From the chief of the tribe, Kid Colt learns that the outlaws took his clothes and guns and that Blackie has been posing as him to commit crimes in the area. After he has fully healed, Kid Colt gets new clothes and tracks down the outlaws to where they are bedded for the night. Stealing back his guns, he wakes up the outlaws by exploding a keg of gun powder, rousing them up and forcing them to flee outside. There Kid Colt mows down the entire gang and his impostor before recovering Steel and riding away.

While riding through a lightning storm, Kid Colt happens upon a wild black stallion and pauses to watch it. Although the Kid has his faithful horse Steel, Kid Colt cannot resist the urge to try and tame the wild stallion anyway. Racing Steel, Kid Colt catches up to the stallion and manages to hop onto it's back and quickly tames the horse just as a downpour begins to fall.

Kid dismounts the stallion and remounts Steel to head for a dryer surroundings. He is surprised when the black stallion begins to follow behind them. As he rides, an outlaw named Jack Tyndall -- on the run from the law and with a posse on his tail -- the man demands that the Kid turn over the black stallion. Not wishing to tangle with the law either, Kid Colt gives him the extra horse and Tyndall rides off. However the posse catches up to him. As Kid Colt watches, Tyndall tries to flee the law but meets his end when the stallion suddenly bucks him off sending him over a cliff to his death.

Convinced that the horse is cursed, Kid Colt watches as the sheriff and his posse fight over ownership of the horse. The argument ends in bloodshed, with only one man surviving. The man takes ownership of the horse, and takes it into town where he plays cards in the local saloon. Kid Colt confronts the man there and demand that he set the horse free, but he refuses. When the man tries to draw, Kid Colt is faster and shoots him dead. The Kid reclaims the horse and sets it out back into the wilderness.

Appearing in "The Glory Trail!"Edit

Synopsis for "The Glory Trail!"Edit

Outlaw Simon Leech is set to hang, but two other outlaws, Luke Foyle and Mize Callum try to get him down. Leech's neck is broken in the process, but the two other men cannot bring themselves to put him out of the misery. Seeking a way to avoid becoming bait for vultures, Leech convinces them to carry him up to Goat Hill to be treated by a renegade Native American named Forked Tongue who he believes can use Native American magic to heal him. Foyle and Callum, despite their fears, bring Leech to see Forked Tongue and flee.

Through some miracle, Simon Leech is healed and is able to walk, however his neck continues to tilt in a broken slump. Using his horrifying visage to strike fear into people, Leech gathers up a posse and begins ransacking towns and burning them flat.

Soon Kid Colt rides through one of the towns just as it was attacked by Leech and his gang. Kid Colt comes to the rescue of two boys from a burning farm house. Learning that they are the sons of the local sheriff in the town of Salt Lick. Kid Colt leaves the boys with neighbours and rides into town to inform the sheriff what happened. There he learns that Simon Leech and his gang slaughtered many of the townspeople including his wife.

Learning that Leech and his men are heading to White Horse Gulch, Kid Colt takes a short cut to get there first. No wishing to be interfered with, Kid Colt gets the drop on the local sheriff and his men and locks them in a jail cell. He then waits on the roof of the sheriffs office and picks off the entire gang with a shot gun. With Simon Leech the only man left standing, Kid Colt jumps off the roof and unloads both of his guns into Leech. Leech dies at Kid Colt's feet, proving that although the man was possibly healed by magic, he was still just an ordinary man.

Retrieved from "https://heykidscomics.fandom.com/wiki/Kid_Colt_Outlaw_Vol_1_21?oldid=1439581"
Community content is available under CC-BY-SA unless otherwise noted.