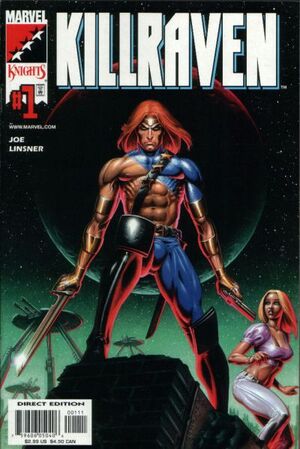 Newark, New Jersey, May 2020: Killraven meets up with M'Shulla and tells him of his recent wanderings brought him to find a girl.

While attacking Martian tripods, Killraven uncovered a long hidden cryogenic chamber, with one of the tubes still functional with a living person inside. Reviving the girl, named Alice, Killraven learns that she and a number of her friends put themselves in cryogenic stasis in 1974 to get away from a world that, to them seemed horrible and on the road to the destruction of the human race. Their hope was to be revived in the year 2001 to awaken to a utopian society.

Killraven has the unfortunate duty of informing her that the human race was nearly eradicated and has since been enslaved by Martian's who invaded Earth during the very year which Alice and her friends hoped to be revived. Killraven tells her of his life and his adventures as a resistance fighter against the Martians and his hope to one day free the human race from their rule.

Alice at first doesn't believe it until Killraven has to defend Alice from a Tripod and kill it's Martian pilot. Having witnessed the horrors of the year 2020 first hand, Alice cannot stand to live in this world and asks Killraven to bring her back to her chamber so that she can go back into cryogenic stasis. However before doing so, she gives Killraven her ring, which is stylized with the sign for peace, which Killraven wears as a source of inspiration.

Retrieved from "https://heykidscomics.fandom.com/wiki/Killraven_Vol_1_1?oldid=1502669"
Community content is available under CC-BY-SA unless otherwise noted.