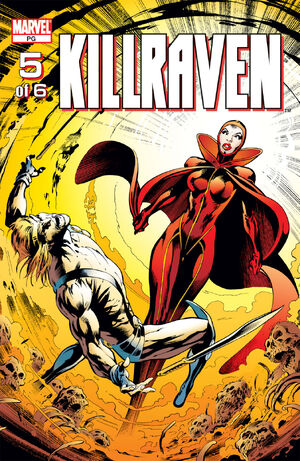 Keeper Whitman is called before his superiors and the Martians, who communicate with him through one of their telepathic speaker-slaves. The Martians want to know what makes Killraven special, and discover that Killraven's brain node enables him to scramble their sensors, and that he has a sense of morality. Thinking that Killraven may be the key to them decrypting the human enigma, the Martians withdraw to consider the situation. As the Martians' Keepers discuss their search for Killraven, Keeper Whitman is told that because of his failure, he will be exiled to the wilderness. When he protests, he is told it is either that or the gladiatorial arena. Terrified, Whitman leaves with his Sirens.

At Killraven's snow-covered camp, Carmilla and Volcana Ash talk about the village of people Killraven freed from the warlord Lucifer's control and how he now feels responsible for them. M'shulla joins them and they discuss Hawk. They are concerned that not only has Hawk avoided every fight they've been in, but that he's started to use Killraven's reputation to set himself up like a slavemaster and dress like Lucifer. Moving on, they find Old Skull, and John. John, helped by the apparently mute Grok, has worked out how to disable the tracking devices on the Martian weapons they've stolen, and how to activate their heat rays and defense screens. John also explains that the Martians are not equipped to deal with guerilla warfare. M'Shulla says he has to talk with Carmilla, but she walks away. Out of earshot of M'Shulla, Carmilla tells Volcana that she's expecting M'Shulla's child. Before they can say anymore, the alarms warning of a Martian attack sound.

Meanwhile, Killraven runs from a Martian tripod attack, desperate to stop them before they reach the village. Going further, the horrified Killraven finds the village destroyed and his friends dead. Killraven sees the Siren Skarlett, who tries to use her mental powers to persuade him to return to the Martian citadel. Killraven resists and strikes her. Skarlett presses her mental attack again, and Killraven decides to open up his mind to her and she is overwhelmed by the death and destruction she sees. Killraven's vision clears and he sees that there were nine Sirens, who now lay unconscious around him, with Keepers' men surrounding them. Killraven evasdes the men's attacks and defeats them. He demands that Skarlett tell him what is going on, and she says that the Martians want to study his uniqueness, and that the others were expendable. She tells him his friends are dead and he races back to the village. Reaching it, he finds the village destroyed and is devastated, until Volcana and the others all appear and explain that they tricked the Martians and caught them in a crossfire of their own death rays.

Hawk starts to boast about their victory and the fact they can defeat the Martians again, but Killraven tells him to shut up and they argue. They're interrupted by John, who says Grok found a portable computer in one of the tripods that contains information that will let them destroy the Martian citadel with a bomb in the right place.

Killraven and his Freemen approach the Martian citadel, and Hawk and M'Shulla start to bicker about Hawk's battle avoidance. As M'Shulla teases Hawk about him wearing armor, Hawk lashes out and stuns M'Shulla and Volcana. Killraven moves to defend them, only to find his weapons have been deactivated. Hawk attacks Killraven with a sword, while Killraven defends himself, begging Hawk to stay down so he doesn't have to kill him. When Hawk continues to attack, Killraven has no choice but to break Hawk's neck, killing him. As Killraven sits, stunned, Keepers' men arrive and surround him, and he realizes it's a trap. A voice behind him confirms that he walked right into the trap, before Killraven is knocked unconscious from behind. It's Grok, who is clearly not mute as he had led them to believe. The traitorous Grok tells the Keepers' men to take him to their Martian masters, as he has a gift for them...

Retrieved from "https://heykidscomics.fandom.com/wiki/Killraven_Vol_2_5?oldid=1441013"
Community content is available under CC-BY-SA unless otherwise noted.