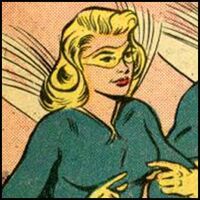 When actress Kim Brand slipped and fell out of a hotel window, the Fly rescued her and she fell in love with him.

Later, an enemy of the Fly thought to outwit him by creating two crimes at the same time, assuming that the Fly could never handle both at once. Turan, Emissary of the Fly People, appeared to Kim Brand and offered her a Fly Ring so she could become Fly Girl and help the Fly.

Retrieved from "https://heykidscomics.fandom.com/wiki/Kim_Brand_(Earth-MLJ)?oldid=1581666"
Community content is available under CC-BY-SA unless otherwise noted.