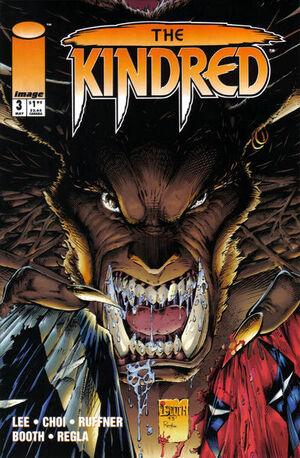 Grifter and Backlash are captured by the Kindred and learn that their leader, Bloodmoon, is one of their old Team 7 buddies, Robert Diaz, whom they thought long dead. Both Lynch and Backlash are forced to fight for their lives in arena battles against members of the Kindred. Lynch uses his powers to win but Backlash is badly beaten and left for dead.

Retrieved from "https://heykidscomics.fandom.com/wiki/Kindred_Vol_1_3?oldid=1607010"
Community content is available under CC-BY-SA unless otherwise noted.