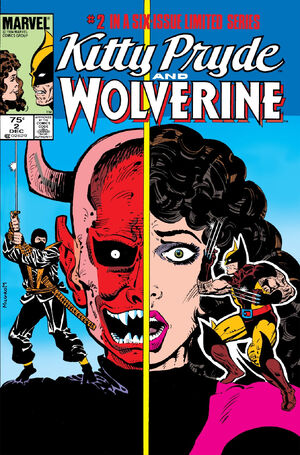 Heed my words... your child is as one dead. She is MINE now, and lost to you forever.

After discovered her father issues with Japanese gangsters, Kitty tries to fight and escape but Ogun wants her as his payment for helping Shigematsu and catch her. Meanwhile Wolverine arrives in Japan after that strange call from Kitty last issue. Kitty is first mental trained to remove all her memories and then physically trained by Ogun. After intense training she becomes a mortal ninja that only responds to her master Ogun. Wolverine invades Shigematsu home asking for answers about Kitty and then Shigematsu and Ogun arrange a meeting with Wolverine for the next evening. At the end Ogun tells Kitty he has a new enemy and she will have to kill him.

Retrieved from "https://heykidscomics.fandom.com/wiki/Kitty_Pryde_and_Wolverine_Vol_1_2?oldid=1440093"
Community content is available under CC-BY-SA unless otherwise noted.