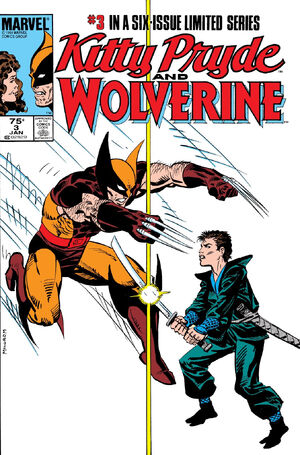 More costumed crazies! Maybe they'll all kill each other and I'll finally be free of this nightmare!

Wolverine is in Tokyo looking for Kitty Pryde, who went to Japan after his father. Yukio jumps on Wolverine and after a brief fight and something more, he ask her about Kitty and Shigematsu. Later Wolverine is attacked by a ninja wearing a demon red mask. The ninja throws a smell bomb at him, shoots an arrow at his leg and poisons him with his claws. Wolverine has to hide himself to let his powers heal him. Yukio finds Carmen Pryde, Kitty's father, drunk in one of Shigematsu Industries' room. There she is attacked by Shumai, ex sumo fighter and Shigematsu's bodyguard. She throws him from the window but grabs his hand at the end, just to be push down by him together with Carmen. Yukio manages to save them both. In another place the ninja finds Wolverine and the battle begins in the subway. At the end the mask fells and the ninja was Kitty Pryde, ready to stab Wolverine with her sword.

Retrieved from "https://heykidscomics.fandom.com/wiki/Kitty_Pryde_and_Wolverine_Vol_1_3?oldid=1440095"
Community content is available under CC-BY-SA unless otherwise noted.