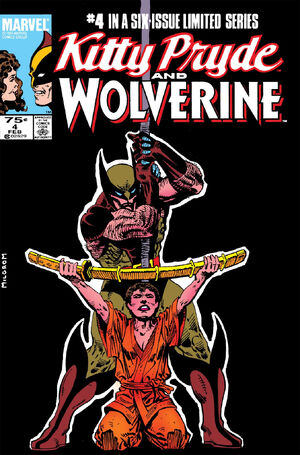 Yukio transports the injured Wolverine and the brainwashed Kitty (along with her father) to the Yashida stronghold. When Kitty awakes, she is at first her normal self, remembering nothing until Logan makes her. He explains and shows her that Ogun in effect created a copy of his own personality in her. Still weak himself, he begins to train Kitty to stand up to that and him. Both of them have a shock when Xavier reaches them to tell them that Wolverine’s friend, James MacDonald Hudson, leader of Alpha Flight, is dead, and that their teammate, Storm, has lost her powers. Nevertheless, Logan still tries to press Kitty on, to the point where she realizes it’s all a matter of her willpower. Finally, she succeeds but then decides to return to the States to ask Professor Xavier to help her erase Ogun’s influence. Before she boards the plane, though, she realizes that she must face Ogun to do that, and decides to fly back to Tokyo instead.

Retrieved from "https://heykidscomics.fandom.com/wiki/Kitty_Pryde_and_Wolverine_Vol_1_4?oldid=1440096"
Community content is available under CC-BY-SA unless otherwise noted.