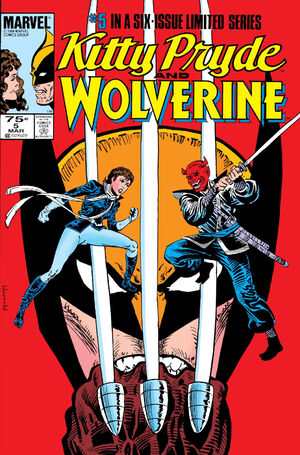 I'm here to make you an offer you can't refuse, old man. Just like in the movies.

Kitty Pryde goes to Tokyo and demands Heiji Shigematsu to stop threaten her father. Then she decides to battle Ogun to the death, and call herself Cat because of her new ninja abilities. She changes places with Mariko, assuming that Ogun would try to kill her, and she was right. She fight very well but at the end Ogun tries to control her mind again but she resists and then Ogun is about to kill her, when Wolverine shows up.

Retrieved from "https://heykidscomics.fandom.com/wiki/Kitty_Pryde_and_Wolverine_Vol_1_5?oldid=1440098"
Community content is available under CC-BY-SA unless otherwise noted.