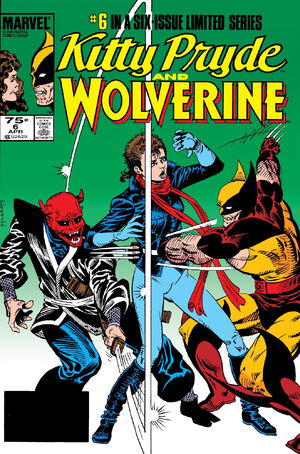 At last the final battle between Ogun and Wolverine. First Wolverine thinks Ogun is too skillful for him, and doesn't want to kill his own master, and run away after sending Kitty to safety. Kitty goes back to the fight and then Wolverine releases his savage side and rage and then defeat Ogun. Wolverine leaves Ogun behind and walk away with Kitty after saying Ogun has been defeated, but Ogun strikes again, Kitty dematerializes herself and through her body Ogun attacks Wolverine and Wolverine attacks Ogun. Because of Wolverine's adamantium bones he doesn't die, but his old master doesn't have the same lucky. At the end Kitty and her father Carmen are ok again and Wolverine is reunited with Mariko and Amiko.

Retrieved from "https://heykidscomics.fandom.com/wiki/Kitty_Pryde_and_Wolverine_Vol_1_6?oldid=1440100"
Community content is available under CC-BY-SA unless otherwise noted.