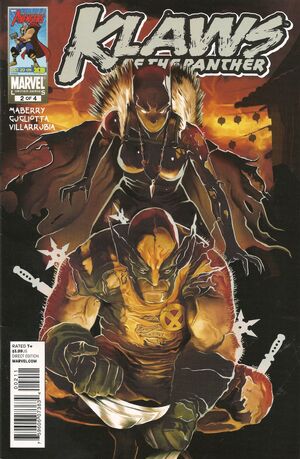 Appearing in "Sound and Fury"Edit

Klaw, Master of Sound, is no more dead than he is human. The killer composed of living sound is back with a new and deadly plan that will spill blood from the Savage Land to the streets of New York. Shuri, the new Black Panther, has already tried (and failed) to stop this monster –a defeat that owed as much to her own reckless rage than it does to Klaw’s power. So, Shuri turns to the person who knows more about battling inner rage than anyone. If you think you know the Black Panther –you don’t. So don’t miss this installment of NY Times bestseller Jonathan Maberry’s exciting new series.

Retrieved from "https://heykidscomics.fandom.com/wiki/Klaws_of_the_Panther_Vol_1_2?oldid=1641729"
Community content is available under CC-BY-SA unless otherwise noted.