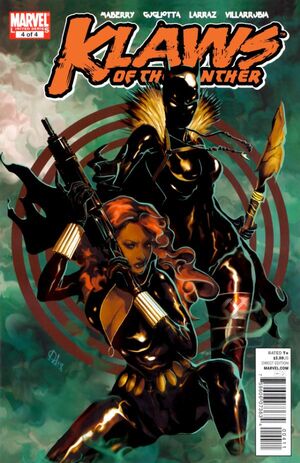 Appearing in "Enter the Black Widow"Edit

Klaw and AIM are poised to conquer the earth with their unstoppable new weapon: THE SCREAM. The problem is that in order to defeat them, Shuri the new Black Panther has to break into DEAD AIM, the most secure facility on the planet. That kind of job needs finesse rather than savage aggression, so who better to help beat the unbeatable security system than the Black Widow. NY Times bestseller Jonathan Maberry and artist Gianluca Gugliotta rocket to an explosive conclusion of the new Black Panther’s most critical mission.

Retrieved from "https://heykidscomics.fandom.com/wiki/Klaws_of_the_Panther_Vol_1_4?oldid=1727181"
Community content is available under CC-BY-SA unless otherwise noted.