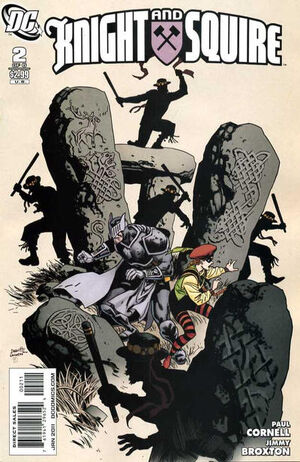 Appearing in "For Six, Part Two"Edit

Synopsis for "For Six, Part Two"Edit

Whilst Beryl is at the local newsagents in little Worden Shire, a music-themed super-villain shows up clad in a garish purple outfit with an organ grinder and monkey. Despite his pet monkey regaling them with tales of his master's devilry, the shopkeeper has no time for him and his kind, and tells him to go to London with the rest of his type.

Back at the house Beryl shares with her mother, Mrs. Hutchinson is busy taking in the clothes from the washing line in the garden (including her daughter's Squire outfits). Soon an emergency call comes in from Knight. She quickly transforms into her outfit and races to her emergency transport tube to the castle, hidden in the garden shed. Cyril's computers have detected dark dimensional energy emanating from a small Devonshire village. He wonders if its linked to a series of unsolved thefts of magical items over the last few months. They take their horse-shaped bikes to the village of Yeominister Churney and in their civilian guise ask around the Wicker Man pub about any strange goings on. One local old geezer Elijah Snood talks darkly of "Morris dancers" and all three are cast out of the pub.

Once outside Elijah is hit with a club to the head and an army of Morris Men ambush Beryl and Cyril. Fortunately the fighting skills of the Morris Men (called Wassail Futtock) are no match for Knight and Squire. After their victory Elijah lays dying, confessing he used to be one of them until Major Morris showed up. He began whispering in the ears of the Morris group describing a London "full of foreigners and homosexuals", and claiming he knows what to do about it. His plan is to gather magical objects and use their power to turn Britain into a "yesteryear paradise". The ceremony is happening tonight.

Knight uses a strip of cloth ripped from the Morris Men during the fight to track them down. Feeding it into his bike's (Anastasia) chemical tracking system they race to a circular set of standing stones nearby to infiltrate the intolerant Morris Men. Knight and Squire beat up two guards to steal their clothes and dress as Morris Men themselves. Their disguise allows them to get closer to the centre of the circle. The magical items reach full power and energy strikes the collective minds of the Morris Men, drawing on their thoughts to create this "perfect Britain". Nothing happens as Squire's presence, as a female, disrupts the spell completely. Major Morris disappears in a flash and leaving behind a twisted version of the union flag, the black jack, from a "hell dimension Britain" Knight and Squire have encountered before. Police soon arrive to arrest the other Morris Men who go quietly

Retrieved from "https://heykidscomics.fandom.com/wiki/Knight_and_Squire_Vol_1_2?oldid=1457889"
Community content is available under CC-BY-SA unless otherwise noted.