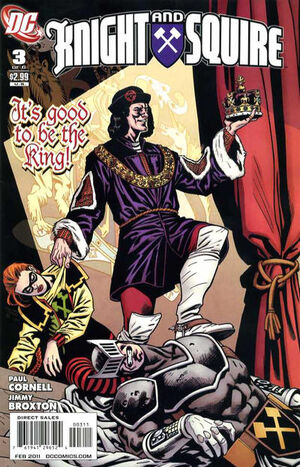 Appearing in "For Six, Part Three"Edit

Synopsis for "For Six, Part Three"Edit

Professor Meriweather of C.O.R. labs (Council for Organised Research) perfects the art of instant human cloning and with a certain "multi dimensional" technique can bring back people with complete memories. Richard III is first on the list but he quickly reveals he is as evil and power hungry as Shakespeare portrayed him. Monologuing to no one in particular he reveals his evil plans. He recruits an army of gangsters and clones of other despotic kings (giving them genetic enhancements) and attempts a coup.

Edward I head to Scotland to be engaged in combat by the professional Scotsman; Charles I heads west (still missing a head) armed with cybernetic projectile weapons and is held at bay by the heroic Cider-Men; King John and Edward II attack east to be beaten by Big Mummy, her wrestling daughters and Shrike (abandoning his former status as a villain). Richard and his underworld cronies charge down the motorway towards the capital with Knight and Squire in their path. Richard send his minions against Knight, who easily defeats them and trying to goad Richard himself into combat.

Squire meanwhile is in charge of the PR war. Noting their current popularity on social network site Twuntter, Squire re-edits footage of the kings to discredit them and posts the offending videos on OohTube. Squire happily reports to knight that there's a "mass defriending ahoy". Richard is angry his popular support has ebbed away and knows exactly who's to blame. Finally drawn into battle he mounts his motorbike and charges Knight on the motorway. Spouting Shakespeare-eque dialogue as he rides, Knight swiftly punches Richard off his "steed". His remaining army of criminals are quickly arrested and Squire and Shrike meet up outside Buckingham Palace. Both seem too shy to ask the other one out until Knight intervenes and invites Shrike to the castle next week.

Retrieved from "https://heykidscomics.fandom.com/wiki/Knight_and_Squire_Vol_1_3?oldid=1457891"
Community content is available under CC-BY-SA unless otherwise noted.