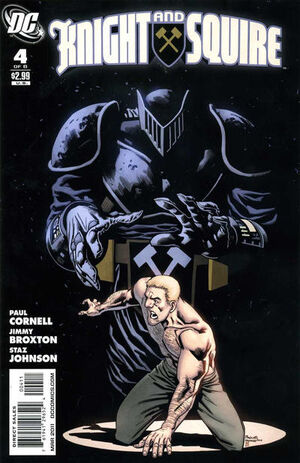 Appearing in "For Six, Part Four"Edit

Synopsis for "For Six, Part Four"Edit

Beryl is eagerly looking out across the countryside worrying that Shrike is late or not coming at all. He flies in and they exchange awkward greetings.

Meanwhile Cyril and Hank are down in the dungeon attempting to modify the A.I. of his knight armour to keep it fighting even after Knight has been rendered unconscious. He takes a neural imprint of his mind but nothing seem to happen. They abandon the project to go and meet their guest upstairs. Unseen by all the knight suit suddenly activates.

Beryl takes Shrike to a sitting room and introduces him to Cyril Sheldrake. Shrike is alarmed as they trust him with their secret identities so quickly after meeting him, but his hosts aren't worried. Especially since they already know Shrike's real name and background. Calling him by his given name Dennis Ennis from Colchester seems to anger Shrike greatly and he calls Beryl a "damn moron". Cyril takes Dennis to the battlements for a quite word, calmly advising him not to call Beryl names or raise his voice again. Shrike apologises and they put the matter behind them.

Meanwhile back in the dungeon the suit is awake and calls out for Beryl. Looking in a mirror he sees, to his horror, that the suit is empty.

Hank discusses matters with Beryl, who is inclined to beat Shrike up and send him home. Hank advises a more moderate approach citing his youth and lack of grace under pressure. He also claims they are both looking for excuses not to have to deal with their feelings for each other.

Shrike is being given the grand tour by Cyril, showing him pictures of his father and himself as the old Knight and Squire. He tells of his father's death and how he turned to alcoholism so he wouldn't have to deal with living up to his father's legacy. He recounts how a very young Beryl saved him from the gutter and volunteered to be his little sister. He moved into Mrs. Hutchinson's house and got cleaned up, since his reckless ways had already cost him the family home and fortune. Beryl and her mother volunteered the use of their garage as his new base of operations and even give him an old rundown bike to be his steed.

The tour ends back at the sitting room and Shrike and Beryl immediately argue when they meet. Their foul mouth tirade is interrupted by the knight armour who bursts into the room and warning Beryl to stay away from the "imposter" (Cyril). Believing himself to be the real Knight thanks to the mind transfer he attacks Cyril that "stole his body". The fight spills over into the transport tube leading to the Knight's trophy room. Cyril fights back hard claiming his attacker is him but the bad half, the dark side he must always fight against. He recounts his darkest hour when, heavily in debt, he was ordered by his creditor to commit murder. He instead chose the better angel of his nature and battered Mad Hat Harry. The suit apparently filled with Cyril's negative thoughts mentions Beryl's new man and him trying to steal his loved ones away from him. Cyril has no sympathy for his dark halve's self indulgent "twaddle" and keeps fighting him while Squire pulls out an electrical cable to shock the suit from behind. But the suit knows Squire too well and turns to slap the cable away; this she reveals was a feint as Shrike unleashes his energy powers to disable the suit completely.

Shrike is again amazed they trust him enough with the knowledge of how to take down knight armour. But Cyril isn't worried as he is a pretty good judge of character. The damaged suit lies in Beryl's arms still trying to convince her who he is until it dies, leaving her to sob. Later tea is finally served in the sitting room. Cyril excuses himself to leave the love birds alone as they share a kiss.

Retrieved from "https://heykidscomics.fandom.com/wiki/Knight_and_Squire_Vol_1_4?oldid=1457893"
Community content is available under CC-BY-SA unless otherwise noted.