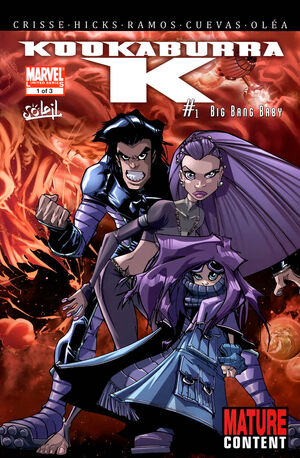 From beyond the farthest frontiers of any solar system explored by man, a destructive force is sweeping through the universe wiping Callystes, Dakoï, Lilith and Planet Earth from the stellar map. A rocket full of refugees hurtles through space with the letter “K” emblazoned on its side. On board the unlikely crew of seven children, several adults, an ancient wizard-knight and the ghost of a cyborg travel with a mysterious cargo that will alter their fates forever.

Retrieved from "https://heykidscomics.fandom.com/wiki/Kookaburra_K_Vol_1_1?oldid=1451212"
Community content is available under CC-BY-SA unless otherwise noted.