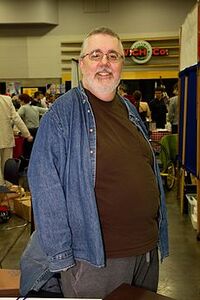 Busiek graduated Syracuse University in 1982, but was already working in the comics field prior. Kurt Busiek presently resides in the Pacific Northwest. The writer is married and has two daughters.

Kurt Busiek has won multiple Eisner and Harvey Awards. Among his work at Marvel Comics, his run on Avengers, Marvels, and Untold Tales of Spider-Man are extremely significant. Busiek also created the Thunderbolts team and concept.

Retrieved from "https://heykidscomics.fandom.com/wiki/Kurt_Busiek?oldid=150192"
Community content is available under CC-BY-SA unless otherwise noted.