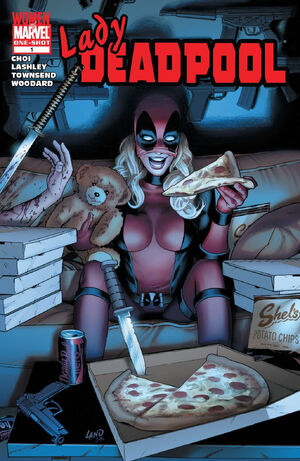 Appearing in "The Revolution Will Not be Televised"Edit

From the stunning sadism that brought you an entire brood of Deadpool droogs comes the chromosomal clusterhiccup that is Lady Deadpool. Agile, armed, and a howling she-lunatic, this recluse is robbed of the only thing she adores more than binge eating: cable TV. In an America ravaged by colossal debt and careening unemployment, the loss of the glowing idiot box is more than this girl can take. Why won’t the government do anything? How is General America complicit? Was the genocide of all sitcom writers necessary? Should Wanda ransack the loins of a hot activist? Probably. 'Cause this Merc with a Mouth packs lipgloss. And it's sticky.

Retrieved from "https://heykidscomics.fandom.com/wiki/Lady_Deadpool_Vol_1_1?oldid=1445689"
Community content is available under CC-BY-SA unless otherwise noted.