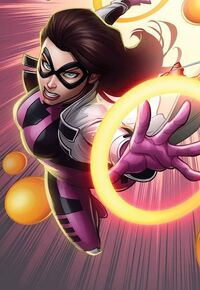 Lana and her mother appeared after the events of Ultimatum. Even with the prohibition on mutants and use of special abilities, they agreed to commit robbery to make money. Their first heist was foiled by Spider-Man and Lana was placed under arrest and most likely sent to a S.H.I.E.L.D. Maximum Security Facility for Mutants.[2] A short time later, the Bombshells attempted another heist on an armored truck, this time being foiled by Spider-Woman and The Human Torch.[3]

After Lana's arrest, the courts deemed her a victim of poor parental influence and Lana's grandmother was awarded custody as her guardian. As a fresh start, Lana was transferred to Midtown High School, the very school Peter Parker, Kitty Pryde, Bobby Drake, and Johnny Storm were attending.

Lana ignored everyone in school on her first day, not until Peter came to introduce himself. Lana was offended because she thought Peter wanted to see if she was easy to put out, but Peter insisted he wanted to extend a hand of friendship. When Lana didn't believe Peter's intentions, she walked off, but not before Peter identified her as a Bombshell. Surprised that Peter even knows, Peter explained she gave herself away due to her potty mouth. Lana begged Peter to not reveal her identity to anyone and Peter agreed after assurances she's not there to blow up the school.

Lana was released on parole under the conditions she didn't use her powers before she was eighteen.[4] She was chased by Cloak and Dagger in hopes of finding answers about what happened to them. She was captured, but it would seem she escaped or was released.[5]

The new Spider-Man, Miles Morales, and Spider-Woman found her the next day to offer her help, but Taskmaster arrived seeking to capture all three of them.[6] While the others distracted him, Lana had the opportunity to flee but decided to help them, eventually working with them to overpower Taskmaster before the group confronted Roxxon and his Brain Trust. They successful brought them to justice with her expressing her interest in teaming up again.[7]

In the wake of the near-destruction of the Earth at the hands of Galactus, Tony Stark decided to disband the Ultimates. However, Spider-Woman decided to continue the legacy of the deceased Captain America in the form of a team of young heroes, the Young Ultimates, of which Bombshell became part of.[8]

As a consequence of the reality-ending phenomena known as incursions, Lana's entire universe came to an end.[9] One of the few survivors of the universe was Lana's friend Miles Morales.[10] When he found himself in a world composed of the remnants of destroyed realities called Battleworld, he helped the omnipotent being that was keeping it together, the Molecule Man.[11]

As a repayment to Miles' help, when the Molecule Man's native universe, Earth-616, was brought back from its own destruction by Mister Fantastic, the Molecule Man transported Miles, his family and his friends into it, doing so in such a way it was as if they had always lived their entire life there.[12] Lana, alongside her mother, was one of these people brought to Earth-616.[13]

Lana was hospitalized after trying to confront the criminal Hammerhead. Since Miles tried to avenge her and confronted Hammerhead on his own, since she was in love with Miles, Lana interpreted this as an act of love from his part.[14] Not long afterwards, Lana reunited with her mother, who had been freed from custody due to S.H.I.E.L.D.'s dissolution. Their reunion went awry quickly, since Lori intended to continue her life of crime, and reclaim Lana since she was still a minor.[15] After Lori joined the Sinister Six led by Iron Spider, she forced Lana to help them carry out a heist to steal a decommissioned S.H.I.E.L.D. Helicarrier.[16] She reluctantly agreed, but tipped Spider-Man off when they were carrying out the heist. Unfortunately, he failed to stop it, and the Sinister Six flew away on the Helicarrier cloaked.[17] Together with the Champions, Spider-Man tracked down the Sinister Six to Latveria, where they planned to sell the Helicarrier. When they intercepted the meeting between the villains and their client,[18] Lana turned against her mother and knocked her out.[19]

Retrieved from "https://heykidscomics.fandom.com/wiki/Lana_Baumgartner_(Earth-1610)?oldid=1772797"
Community content is available under CC-BY-SA unless otherwise noted.