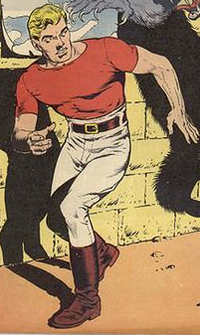 In 1919 twin brothers Michael and Lance Gallant were born in New York City. They were so alike, even to a T-shaped birthmark on their left wrists, that even their mother could not distinguish between them. The two remained close, even for twins, as they grew up.

When America was drawn into the Second World War, Michael enlisted in the U.S. Army Air Corps, becoming a pilot. However, on his his 23rd birthday, as he brought his plane in to land, the hangar he was entering blew up. His fiancée, Kim Meredith, and his brother Lance witnessed this act of sabotage, and the latter raced into the burning structure, managing to retrieve his badly injured sibling, only for Michael to die in his arms.

Lance swore vengeance on the murderers and those like them. Unknown to him, the Fates, creatures of myth, were watching all this and decided to create a champion. Soon afterwards Lance received a shocking visitation from Michael's ghost, who revealed that they remained linked together, and that if Lance was to touch his birthmark, they would merge, gaining superpowers as a result. Touching the mark a second time would separate them again. Calling himself Captain Triumph, Lance became a crimefighter.

Retrieved from "https://heykidscomics.fandom.com/wiki/Lance_Gallant_(Quality_Universe)?oldid=1498790"
Community content is available under CC-BY-SA unless otherwise noted.