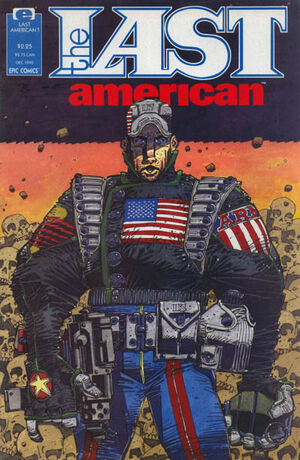 So I took my submachine gun, my cold .45, my precision-weighted thigh knife and my frag grenades -- and I walked off to look for America.

It's been twenty years since World War III left America in ruins. Now, Captain Ulysses S. Pilgrim is finally leaving the safety of his bunker. His mission: Rebuild his country — and avenge it!

Retrieved from "https://heykidscomics.fandom.com/wiki/Last_American_Vol_1_1?oldid=735085"
Community content is available under CC-BY-SA unless otherwise noted.