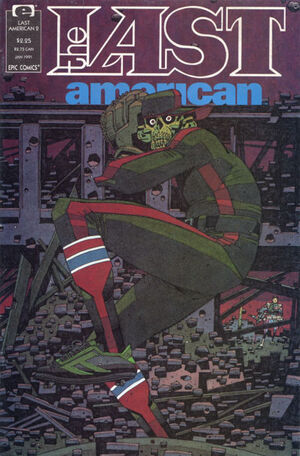 Are you there, God? Come on out! I got a bone to pick with you! A bone -- hah! That's a good one! I got a million bones to pick with you, pal! All the bones in the world! This is all your fault! That's right! You coulda stopped it -- why didn't you? Eh? You're so all-damn powerful, why didn't you do something? Have you seen what it's like out there? Have you? Well, I'll tell you, pal! If there is a God then you gotta be one twisted, evil son of a bitch! Damn you! Come on! I'm not afraid of you! Strike me down! Gimme the big zap! What are you waiting for? Had enough death? Sickened even yourself? Don't worry! You'll be doing me a favor! I don't any part of this. I don't want to be the last American...

Appearing in "Apocalypse: The Musical"Edit

Synopsis for "Apocalypse: The Musical"Edit

Witness the last days of President Sonny Bono and the creation of the Last American Project. Then General Ulysses Pilgrim locates another survivor of the war. Will it be friend or foe?

Retrieved from "https://heykidscomics.fandom.com/wiki/Last_American_Vol_1_2?oldid=735086"
Community content is available under CC-BY-SA unless otherwise noted.