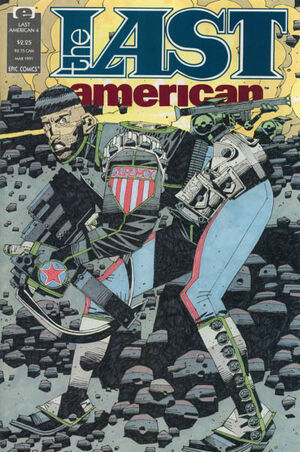 America lay out there, waiting. Somewhere in that vast starlit darkness there might be people. Melinda -- Lana -- babies that maybe grew up. But I don't know that I'm the one to go on searching for them. The America I served is dead and gone. What's there now doesn't need soldiers, and orders, and duty. ... I held the zippo in my hand, so light I could hardly feel it. So heavy, it could only be an omen. Hope...or twilight.

Retrieved from "https://heykidscomics.fandom.com/wiki/Last_American_Vol_1_4?oldid=735088"
Community content is available under CC-BY-SA unless otherwise noted.