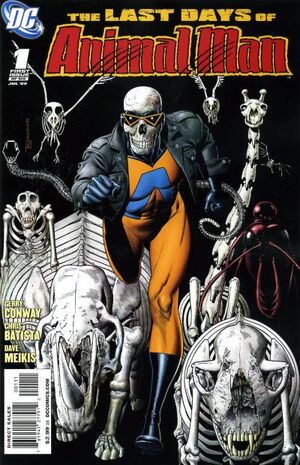 Appearing in "Part One: Deny"Edit

Synopsis for "Part One: Deny"Edit

Several years in the future, twenty years after Buddy Baker first became Animal Man,[1] the City of San Diego has finally finished building a huge, sixty-foot tall levy to keep from being sub-merged.[2] However, Bloodrage is tired of being ignored, and after several threats, decides that he is going to tear it down! Fortunately, Animal Man is there to save the day! Unfortunately, his powers cut-out in the midst of the battle. Luckily for our hero, it is just a temporary glitch - his powers return and Bloodrage is apprehended.

Later, when Buddy returns home, Ellen is quite concerned about what she saw on T.V. - she saw his powers go out. She is concerned, since his powers had been haywire in the past.[3] Buddy dismisses this - his powers are fine! However, when Bloodrage breaks out of prison later, and Animal Man goes to the rescue, his powers once more cut-out and this time it looks like it will cost him his life!

Retrieved from "https://heykidscomics.fandom.com/wiki/Last_Days_of_Animal_Man_Vol_1_1?oldid=1439272"
Community content is available under CC-BY-SA unless otherwise noted.