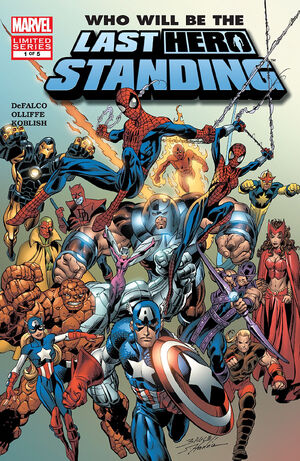 Around the world several heroes are being mysteriously kidnapped, including Wolverine and one of the Ladyhawk sisters.

When the watcher Uatu became aware of this he begins an explanation of the current situation in the Marvel Universe.

While in the Avengers Compound, the headquarters of A-Next in the future, the young heroes are busy being trained by Captain America. At a local hospital, Iron Man has just visited a still comatose Scarlet Witch. After leaving her room, he hears noises in it, and when he re-enters it, she has been kidnapped as well.

Walking on the street, the Thing feels danger and calls out his partners the Fantastic Five.

Peter later discusses recent events with Phil Urich, alias Green Goblin. They are attacked by a gigantic robot which manages to abduct Peter. A panicking Phil contacts May about this, who decides to investigate as Spider-Girl. She, the Buzz, the other Ladyhawk and the Green Goblin dive into a tunnel that was created by the robot that kidnapped Peter. There, they meet up with all the members of A-Next who discovered the same tunnel earlier, however none of them has a clue about why all of this is happening.

Meanwhile, somewhere else, an unconscious Peter is dragged by the robot into a dark realm, and a mysterious person demands revenge for an unforgivable sin that has haunted him forever.

A WEEKLY FIVE-PART EVENT THAT UNITES TWO GENERATIONS! The great heroes of the marvel universe are vanishing without a trace! What has happened to Spider-Man, the Thing, the Scarlet Witch, Captain America, and the rest of the MU's heavy hitters? Spider-Girl, the fantastic five and a-next must join forces with today's superstars to uncover the answer – and the trail leads to a major Avengers villain! Does the presence of the Watcher signify the end of this age of heroes?

Retrieved from "https://heykidscomics.fandom.com/wiki/Last_Hero_Standing_Vol_1_1?oldid=1440314"
Community content is available under CC-BY-SA unless otherwise noted.