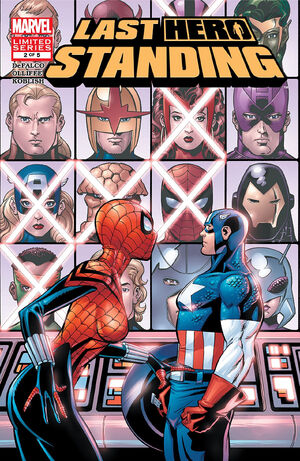 Captain America exercising at Avengers Compound. Thunderstrike realizes Cap is feeling down because of his old age, and promises him that he does not have to worry about that because A-Next will follow him anywhere. Cap and Thunderstrike get called to an A-Next meeting. They discuss possible villains who could be behind the kidnappings. They suspect Kala the Queen of the Underworld, Tyrannus, Master of the Subterraneans, Terrax the Tamer, the living Lava Man or Mole Man, the ruler of Monster Isle.

They also inform the X-People about the situation, but Jubilee, the leader of the X-People, decides they work better on their own, causing J2 and Wild Thing to wonder why they ever bothered to try join the X-People; they are glad they decided to stay with A-Next. The team decides to split up to investigate the different possibilities.

At Barton’s Dojo, American Dream and Freebooter discuss things with retired hero Hawkeye. However, not much later, a crack in the ground is made and kidnaps the heroes as well.

The Fantastic Five depart to Monster Isle, only to discover that the Mole Man is dead, and that even a statue has been build in his honor. This means someone else has to be behind the kidnappings.

Spider-Girl, Captain America and Thunderstrike learn about the kidnappings at Barton’s Dojo. They jump into the hole together with J2 and Wild Thing. There, they discover a weird portal. After entering it, the heroes are immediately attacked by robot-like creatures and start to fight them. However, they get soon outnumbered and fear for their safety.

Not much later, the mastermind villain reveals himself to be Loki. He wants revenge on the Avengers, realizing he helped create them years earlier, and shows that he holds the missing heroes prisoner in life-size crystals. He also demands an end to the Age of Heroes.

It is revealed that in MC2 universe, Mole Man is dead.

Loki is responsible for both Avengers and A-Next creation.