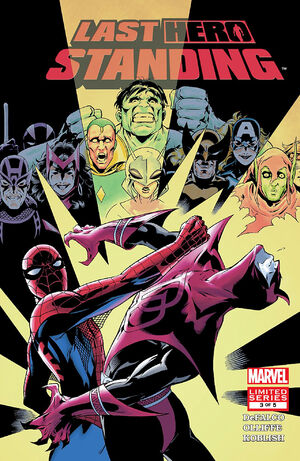 Spider-Man returns to Earth completely brainwashed and very violent while Spider-Girl and the other heroes are still being attacked by the robot-like creatures. Cap and Thunderstrike are defeated and kidnapped, and Spider-Girl suggests she and J2 retreat while they can. Though he does not like to desert their teammates, J2 complies.

Meanwhile in the city, Spider-Man confronts the hero he dislikes most: DarkDevil. The two fight each other, despite DarkDevil trying to stop the webslinger.

The Vision returns to Avengers Compound, where he finds Stinger discussing matters with Jubilee, who promises to contact them when she learns something more. The Vision explains he has arrived at the request of the President of the United States, G. W. Bridge, who believes the kidnappings could threaten the nation. Jarvis suddenly comes to inform the two that all of the missing heroes have mysteriously returned. Before more can be asked about the mysterious return or what happened with them, Jarvis also alerts them to the Spider-Man/DarkDevil battle in midtown.

Captain America, Wild Thing and Thunderstrike are put in chains. Wild Thing is angry at Cap for not seeing this coming, causing him to feel down a bit. Elsewhere in the caves, Loki managed to kidnap Nova as well. He injects Nova with a dark mist, which causes him to become evil and to side with Loki.

Retrieved from "https://heykidscomics.fandom.com/wiki/Last_Hero_Standing_Vol_1_3?oldid=1440318"
Community content is available under CC-BY-SA unless otherwise noted.